The Value of Scourge Minder Swarms 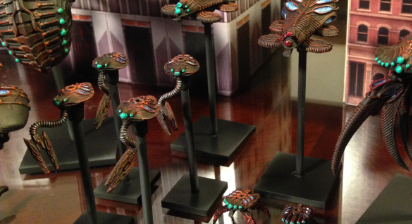 In the continuing coverage of the Scourge for Dropzone Commander, I want to hit what I consider an often over-looked unit, the Minder Swarm. It takes on a scout role for the Scourge, moves slow, and has a weaker than normal Arch Caster. At first I did not like these guys.


Given that Minders have virtually no protection from being shot at.... Armor 3, and can move only 4" a round, you might wonder what these are good for. They are tiny aircraft, and after playing many games with them I have come to really like them.

My first thoughts when I got them, was to use them as guardians to my Desolator (command) unit from Aircraft, particularly fast moving aircraft.. I quickly found that the Desolator cannot wait up for their protection. Because of this, Minder Swarms sat out a couple games, until I found their use.

First off these are scout units. What this does is allow you to extend your command radius from the minders. This allows you good access to many different areas on the tabletop. In fact you can simply load up 4 of them in a quick intruder, and deposit the minders where ever you need more command radius. This can be done in a single round since you can embark and deploy in the same round, and intruders can move up to 15" and you get 3" of deployment. All in all, pick up and deposit for mobile command.

The next role for your minders is line of sight for your artillery. Scourge have a great artillery unit, the Annihilator. In order to not take the +2 penalty for not having line of sight, scout units are needed for more accurate bombardments. The best part is that these are cheap units, and if used this way, you may not even need a dropship for them.

Harass and Destroy. This is by far my favorite use for the Minders, and what I use them for. Of course load them up as a scout unit in a quick invader dropship, and zoom them across the field first turn at 30". Round 2 deploy them another 15 +3 deployment +2 half movement. This allows you to get right up front and personal with enemy dropships, or to jump in front of slow moving enemy units to block their paths. The first chance you get, jump on it, and use the arc casters on the minders to rip enemy dropships apart. Eight Minders can do an awful lot of harassment for a very cheap investment.

Overall, I have come to like minders. They are only 8pts apiece, and their dropships come in at 24pts. With a wide coherency of 6", you can really spread things out to get the maximum use of your Minder Swarms.
3/29/2014
Natfka
Dropzone Commander