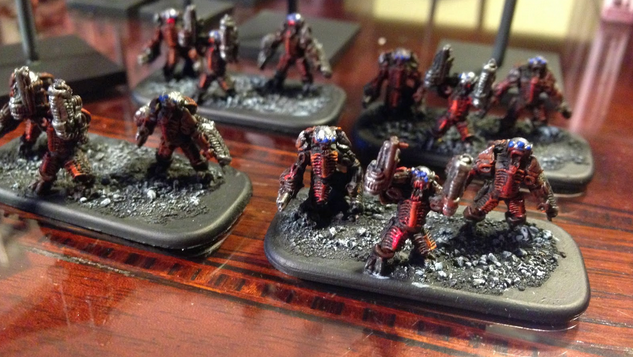 If you play against the Scourge, there is one unit that you should consider your biggest threat on the tabletop, Scourge Destroyer Packs. They are incredibly resilient against enemy fire once inside buildings, and if you get caught too close to them, they will rip apart your whatever they are shooting at. Very little can go toe to toe with them.


Scourge Destroyers are tough in close quarter battles simply because they have an Armor of 4. This makes them extremely tough to take out. Top that off with a 4+ passive countermeasure save, these guys can feel nigh unbeatable.

It really is the Armour 4 and the passive counter measure save that makes these guys so tough to get rid of. They can also never sustain more than 1 dp per hit, and are only damaged by falling masonry on a 5+. With a CQB of 3 they are getting 9 dice per base to throw down against the enemy.

Firepower. Destroyer packs get a single round of E10 shots, 3 per base at 6". Beyond this, they get some great anti-infantry fire at at E5 with 6 shots at 36", 12" against countermeasures.

What this means is that you can load these guys up in very fast intruders, shoot across the tabletop round at 30". Then hold moving these guys until the your opponent has committed in round two, and jump into a building your E10 Plasma Chargers have targets against. Attempt to go first round three, and the Destroyer Packs ( I field two) will clear the area of enemy vehicles or walkers. I have done this many times, and my opponents already know to stay clear of them if they can.

So where do Destroyer packs lack. Well first off all, you are extremely limited in their use, just based on what you can take in your army. You only get two special Battlegroups, and in each one, you only can get two exotic squads. This really limits the numbers of these guys you will ever see pitted up against you.

As for fighting them there are few units that can go into a straight up battle against them. Shaltari Firstborn do quite well, but Ive often seen the Destroyers edge them out, so bring help. Flamers are nice, but with the Destroyer Packs Armor of 4, and a passive 4+, its just flat out hard to deal with them.

The best thing I have seen done against Destroyers, is to just evac out of the 6" firing zone, and give them some room. Shoot down their Dropships, and strand them. I recently had this done to me, and it did limit the effect of my Destroyer packs.

Overall, if you are Scourge and not using these guys...... you need to try them out. I tend to throw them into a Occupation Patrol Battlegroup like the pic below.