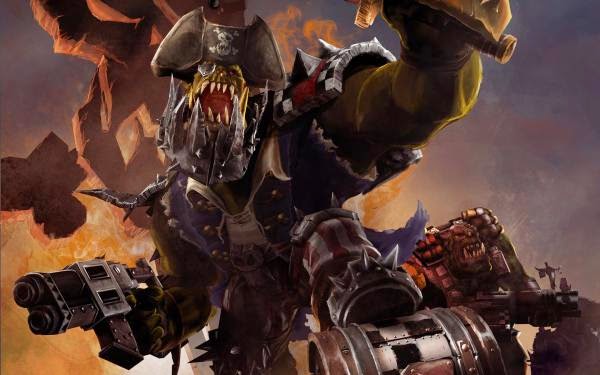 According to this rumor, someone has seen the Ork codex, and laid out many of the rules, and listed the releases that will come with it. Some of the big ones, is that every unit can Waaagh, Orks get a 6+ FNP, and some new units, like the Gutripper and a Squiggoth like beast.

Please remember that these are rumors, and take with a little extra salt.

via Juvieus Kaine on Dakka
Here's a little bit I was informed of by a friend. He's up in Scotland and good mates with a GW employee and apparently he's had a look at the next Ork codex.

In essence, Orks are the next 40k race getting an update.
Choppas are going to give +1 strength amended, see 19/3/14
Waaagh! is now old Fleet. So move, run and assault in the same turn.
Power Klaws are double strength, AP1

That's what I've heard so far. I can't verify the information since it's word of mouth but so far, his contact has been rather accurate on the more recent releases to date.

Orks
Still have the Mob and Furious Charge rules
Orks now have 6+ FNP
Each unit now has Waaagh! points
Waaagh! charge now per unit, not per army.
Sluggas generate 1 Waaagh! point for each turn in combat
Shootas generate 1 point for each unit kill with shooting
Waaagh points also generated from every 3 units of 10+ models (unsure of this one)
Mega Armour now has Deepstrike rule

Lootas
Deffguns are now options
Unit is now cheaper and has more options for weapons
Gains new rule: Loot
- If in base-to-base contact with a destroyed vehicle, they can fire one of its weapons. Not clarified if per turn or per game.

Gretchin
Now separate from Grots
Units of up to 20, 2pts per model
Has an upgrade called Control Collars: basically, bomb collars that explode when the unit fails Leadership. Think alternative for Runtherders

Weirdboyz
Now have a warp powers table; either Divination, Gork or Mork
Use Waaagh! points for powers
Waaagh points also contribute to Weirdboy’s death. When he dies, casts "Eadbanga" on himself. More points means bigger and more powerful explosions

Bomb squigs now can be taken as units
Includes more options. Can have upgrades for more powerful explosions or melta

Due to Waaagh! changes, Ghaz has 3 Waaaghs! Not sure if armywide or distributed to units
Killa Kanz to Elites – may require Grot boss

NEW UNITS
New unit of Warlord Nobz, can be taken as HQ. One Nob is the Warlord. On death, another Nob is the Warlord. Must kill entire unit for the kill
Possible mek tanks with upgrades
- Upgrades including a KFF and a SAG that shoots bomb squigs – if they miss you place a bomb squig
SAG and Flakk guns might be taken as Big Gunz unit
Halftrakk unit called Gutripper
Multi-wound Squiggoth-like beast