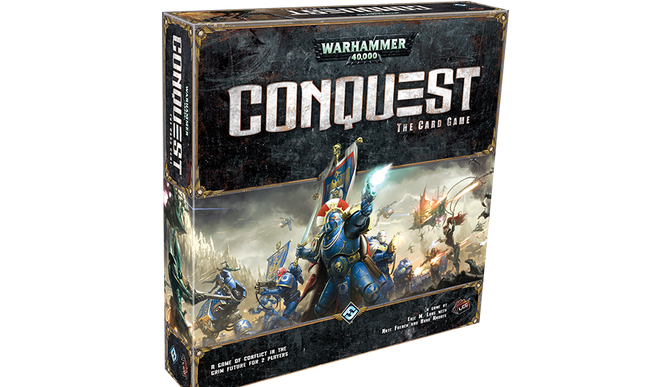 Warhammer 40k Conquest is new game from Fantasy Flight Games. I am a big fan of many of their games, and this one is definitely on my list to check out and possible get for my month Game Nights that I host. Conquest is a 2 player card game where you will try to capture planets to control the sector.

As a fan of the quality of Fantasy Flight's board games, this will be eagerly awaited as it is not set to be released until the third quarter of this year. Here is a link to the games information on Fantasy Flight Games.
http://www.fantasyflightgames.com/edge_news.asp?eidn=4704


via Fantasy Flight Games
Deep in the Ultima Segmentum, precious resources and lost artifacts have been found in the recently explored Traxis sector. In order to secure these treasures, the Imperium of Man wages a bloody conflict, desperately holding back tides of traitors, Daemons, and Xenos alike. The foul forces of Chaos plunder and corrupt, furthering their own goals of conquest and madness. Meanwhile, alien races of all kinds build their own empires, casting out all who would challenge their dominance. Blood will be spilt. Champions will rise. The only certainty is that there can be only one victor.

In every game, you take the part of a warlord, leading your armies into battle against your opponent in a bid to claim glorious victory. Even as you lead your bravest warriors into battle, you must plan for the future, establishing a presence on planets before the tides of war consume them in blood and fire. You must conquer the Traxis sector by strength of arms, for in the grim darkness of the far future, there is only war.
3/19/2014
Natfka
40k, Fantasy Flight Games, News Headlines, Warhammer 40k