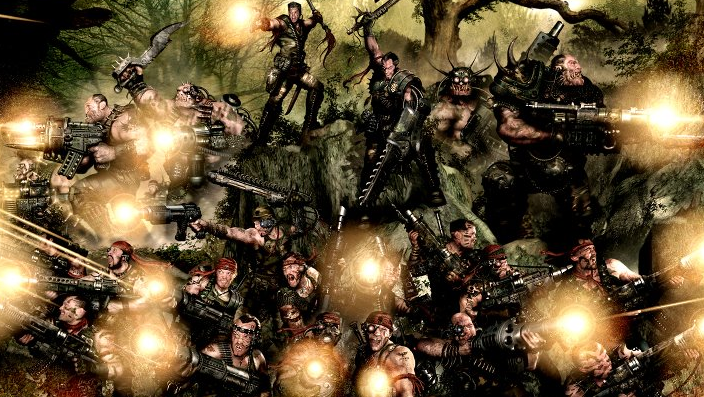 One of the big releases for the new Astra Militarum coming our way soon is the new Ogryn kit, with one of the options being for Bullgryn (Ogryns with armour and riot shields). New rumors are coming through saying that these new units will be able to set up a mobile aegis line type defense for units behind them.


While I am not convinced of how tactically effective this will be on the table, it is a very interesting idea, and one I look forward to watching as we get closer to the release.


via lordbeefy on Warseer
Heard a small rumour today from GW staffer....ogryns shields act as mobile aegis line type defence....4+ cover save, but they forgo their move in the subsequent phase. The weapons are a cross between grenade launchers and a mortar with specialist shells. Sounds very feasible from what i have seen of the model. He also said that the moustachiod ogryn is indeed neddog and has some interesting rules. On a par with the Kell rule with Creed.

via an anonymous source on Faeit 212
I saw the leaked images for the new Bullgryns and I wanted to note that we
might see a hint to their rules in it already.

In the 3rd picture of the Bullgryns the text looks a lot like it would
say "The Bullgryns provide cover for the infantry." in German.

So maybe they will have a special rule to provide mobile cover.

via an anonymous source on Faeit 212
I just saw the leaks of the new Ogryn / Bullgryns.

The one with Shields are fun, and one has French Text on the top.

I tryied to get the sentence, partially visible on the image, fully reconstructed.

And here is what I reconstructed: "protection de l'infanterie avec leur mantelets". Meaning: "Protecting Infantry with their Mantlets"
The shield variant, according on German text from the same image, seems to be the Bullgryns. And will have the role of Mobile Defence Line for the IG Infantry Blobs.

Meaning the Ogryn squad won't be renamed, but a NEW Squad, with Ogryns Race models, will be seen. (One of the picture of Regular Ogryns new models has the start of "Les Ogryns" word, again in french, on his bottom, meaning Bullgryns and Ogryns will be differents squad, but probably in the same kit boxes)
3/16/2014
Natfka
40k, 6th Edition, Astra Militarum, Imperial Guard, News Headlines, Rumors, Warhammer 40k