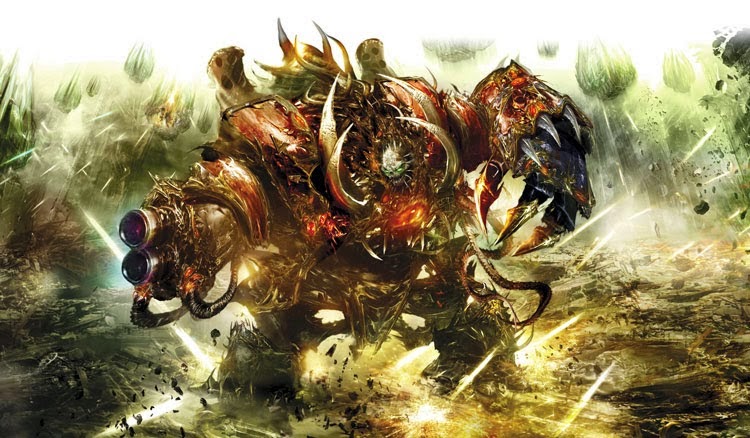 Today the new dataslate Helbrutes was released, and if you are a Chaos Marine player with some of these laying around from the Dark Vengeance box sets, then this set might just be for you. Games Workshop has recently been coming out with some good dataslates, and this is another one. Lets take a look at the 3 formations that come with it.


Dataslate Helbrutes
I have not yet spent the time to read through the background information inside, mostly because I was helbent (see what I did there) on getting straight to the meat of the release, the formations. There was no great new artwork, and this was not surprising as the last couple have not had them either. This is a dataslate though, and background and artwork are not what we get them for.

Helcult
Consists of 1 Helbrute and 2 units of Cultists
*Apocalyptic Fury: Helbrute gets rage, and any ones rolled hit a friendly model randomly determined within 6".
*Living Idol of Chaos: Cultists have fearless until Helbrute is slain, and then loose fearless and gain zealot.
*Human Shields: Helbrute gains a 3+ cover save if obscured by cultists in this formation. Each successful cover save means one cultist is removed from play without any saves.

Mayhem Pack
Consists of 3 Helbrutes
*It Will Not Die
*Mayhem from the Maelstrom: Units in this formation roll one die for reserve rolls. Unit must start in reserve, and arrive by deepstrike
*Tormented Terrors: At the start of your movement phase, roll once on the Crazed table. All models in this formation suffer the results regardless of taking damage previously

Helfist Murderpack
Consists of 5 Helbrutes with one nominated as Helbrute Champion
*Murder Pack: All Helbrutes in this formation count as a single vehicle squadron
*Pack Leader: the Helbrute Champion becomes a character, and gets the Aura of Dark Glory reward (5+ invul). Other helbrutes can also make a Look Out Sir if within 6". As long as the Champion is alive, the player may choose which Crazed Table result they want each turn for each Helbrute with a Crazed marker.
*Death of a Leader: If the Champion is destroyed, the other Helbrutes gain Rage.