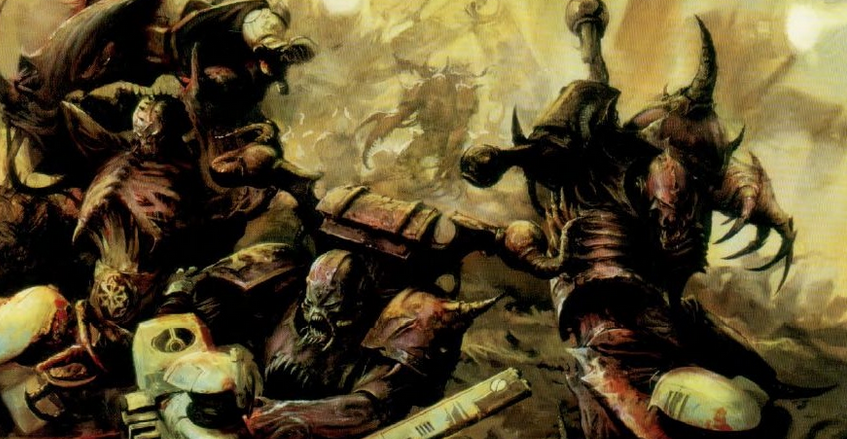 We have had a flurry of activity on the new Imperial Guard, and more, but very little more details about the Crimson Slaughter being released this weekend. So lets take a look at what we have heard so far about the book that focus's on the Possessed.


Please remember that these are still rumors and we will have the codex supplement in hand in a few days not.

Via MAAksel and IngenuityGap on Faeit 212
Crimson Slaughter
2 pages of actual rules
Possessed become troops, lose whatever the possessed special rule is and gain a D3 roll at the start of their owning players turn.
1: Shrouded for the unit and transport
2: Change from Infantry to Beasts
3: Gives a 3+ Invul

Relics
*Armour that gives a 2+ save, crusader, and it will not die for 40 pts
*Item that gives your sorcerors access to Divination for 25 pts but prevents using their bonus to deny the witch.
*Weapon for Lords only that uses S: User AP3 and bonus's for each kill
1 kill for +1S, 3 kills for AP2, 5 kills for +1S, 10 kills for Instant Death.


via Games Workshop
Crimson Slaughter: A Codex Supplement
Once the loyal servants of the Imperium of Mankind, now the Crimson Slaughter leave only destruction and despair in their wake. Tainted by the genocidal purging of Umidia they are plagued by the voices of their victims. Only through butchery can they silence the voices that haunt them - but the whispers of the dead always return.

Within the 72 pages of this hardback, full-colour book you will find: