Home » This is Our Hobby » This is our hobby: Double Force Org Not So Bad?

This is our hobby: Double Force Org Not So Bad? 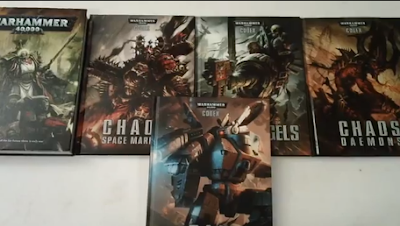 My name is Damon, I'm a long time semi-competitive player from a smallish town who is currently living in Brazil.  I've played almost every army at one time or another and as such have a decent idea of how many armies work.  This article will address the changing value of double force organization charts as we gain access to more and more codices that were actually designed to use it.

And of course, at the time of release (and even now, because the problem codices have yet to be updated) it actually could be a serious problem.  It allowed double the spam of your average already maligned spam list.  There were posts all over every 40k site on the Internet with different lists that *proved* that double force organization was unbalancing, killed the hobby, was only a money grab, and was probably sustained by the tears of bullied children.  The amount of outcry was astonishing honestly, but it wasn't entirely without reason.

Lists were made with 6 Annihilation barges, 18 Necron flyers, 6 squads of Wraiths with 4 Destroyer lords, and probably stuff that wasn't Necrons as well.  The problem was, and still is the ability to take the one thing in your codex that is extremely effective and create an unbalanced overwhelming list that no normal human list would ever be able to combat.

This of course lead to all sorts of solutions.  Some tournaments banned double organization altogether, others went the 1,999+1 route, and it's possible some just played a lower point value because they wanted to play 6th without the rules they didn't like.These are all ideas that were effective in achieving the goal as originally set, however with codices being released at the rate that they are, and looking at the four we already have, is it possible they won't be necessary in the near future?

As more and more codices come out, I believe it's possible to see some trends, and from these, I am positive that double force organization will be working as intended soon enough!  Let's first look at something that people have commented on with every book that has come out thus far: there are no auto-include options! (barring the hell drake of course)  What this means is that so far, 6th Edition is not an edition where spam lists will be easily chosen, because even if one thing is very strong, there will be another thing that competes heavily, and serves a different role, helping to balance the list.  Even the Hell Drake falls short against a deathwing or GK terminators list after all.

So we're seeing that the prevalence of spam is likely going to decrease, but is that enough?  I don't believe so.  Thankfully there is something else that merits our attention with regards to this problem as well: bloated sections in codices!  Now of course this is generally considered a bad thing, especially considering the plight of our tyrannic friends, but hear me out!  Let's look at each codex individually and see what we find.

Chaos Space Marines
The first 6th edition codex, many people complained here about it's lackluster basic troops and bloated HQ choices (as well as fast attack, but we'll get there!).  The complaint went something like this: "I want to take cult troops but then I can only take 1 other HQ!  I have to choose between a Daemon Prince for hitting power and threats, a sorcerer for magical support, Huron for infiltrate, a Dark Apostle for my word bearers theme and combat buffs, or a Warp Smith for other fluff and vehicle repair/curses!"  Turns out this is much less of a concern once you consider that at 2,000+ points you are suddenly allowed 4 HQ choices!

Suddenly you gain the ability to infiltrate your berserkers, and include a Dark Apostle to make them really hit, or whatever other permutation you are coming up with.  This results in a fantastic opportunity for diversifying lists simply by the count of however many permutations you can come up with!  Expanding this to Fast Attack and you can have Raptors in your Night Lords list while still running bikes and your double Hell Drake list.

You no longer have to sacrifice your fluff for competitive edge.

And it should be noted, that 6 hell drakes falls short for the same reason 3 does.  Metal Boxes and Terminators make them almost useless, and now as well, Tau Skyfire proliferation.

Dark Angels
This was the second codex for 6th edition, and honestly was never terribly controversial.  Unlike Chaos, it was pretty much exactly what Dark Angels were expecting, and in my opinion, needing.  That being said, they still came out with the same issue as Chaos had: bloated HQ.  Many people were suggesting that Chaplains were likely to become an elite 3 for 1 choice similar to sanguinary priests, and were disappointed when they (a support HQ) took up the same space as someone like Belial or Sammael.  There were complaints about the inability to change force organization and still bring the fantastic support of Divination Psykers and Chaplains.  Once again, double force organization allows for some more opportunities to run things as you would like.

Daemon of Chaos
Here we have a bit of an outlier...  No section seems terribly bloated in the Daemons codex, despite complaints about their troops being too weak to actually achieve what they are made for (Holding objectives?  Killing elite units?  I'm not 100% on what it is people want to do with the troop choices either...)  They actually generally have a purpose, and for their points cost, are effective in that role.  I think part of the lack of bloating is made possibly by people wanting to run mono god lists as well, but there seems to be little complaint about it unless someone is wanting to run multiple Greater Daemons for a Daemon-zilla style list, because they have to sacrifice Heralds to do so.  Interestingly however, the reality is that the bloat comes in a slot other than seen previously: Heavy Support.  Thus far it seems to be that to have some sort of fire support and massed infantry deterrent, you must have at least one but probably two Soul Grinders.  This leaves you with only one slot to choose between the great support/anti-horde of a Skull Cannon, or the severe firepower of a flamer chariot, or even still however many Slaaneshi lawn mowers you can fit in a slot.  This gives you an interesting choice to make below 2,000 points, and once you hit that mark and the game is scaling up, suddenly you have more options with what permutations you would like to use!

Tau
Lastly we come to the underdog, the Tau Empire.  These boys were neglected for a long time, and finally got the love they deserved.  Again as you look through you can see that there are a couple important units to take, but nothing that screams "Fill all your slots with me!"

When we look through the Tau Codex, there are some great options in almost all of the slots.  That's options, plural, multiple of them.  HQ for instance contains the old standby Crisis Suit commander + bodyguard.  More in depth though we find again, support options that are actually very attractive.  Lacking psychic awareness, there aren't any librarian type options, however the other choices are quite possibly more attractive.  Ethereals became much more attractive, while still giving up an extra point if they are killed, they help the army stick in the fight as much as before, and more importantly, have access to a plethora of buffs!

Not all of these will be terrifyingly important, but they are all decent choices, and having the ability to choose each turn gives fantastic flexibility.  The other very attractive option is the Fireblade.  This bargain HQ turns Fire Warriors or Pathfinders into much stronger options just by his presence, along with adding a little extra wargear, and a split fire marker light to the unit, something not to be overlooked.  That's not even all the bloat in the codex either, running a variety of battle suits is very difficult now with Crisis, Riptide, and Stealth suits all being in Elites.  Supporting your army in fast attack is difficult as well, Pathfinders are very helpful, but you may still want to bring some of the new flyers or Piranhas as well!  What to do what to do!?  The answer again comes in at 2,000 points you are able to expand a little further into your choices.

Now this of course isn't to say that there are no more flaws with double force organization, but perhaps it's time to give it a second look.  The problem remains that opening it up completely allows for abuse by codices that were not designed with it in mind, but 6th edition specific codices seem to be leaning towards it not being such a devastating proposition, as well as opening up for some diversity in HQ choices for lists, to allow some lesser seen but still very interesting choices to be seen on the table top.

What's to be done with this in it's current state of flux?  I'm not the one to say.  Unfortunately but justifiably, the community would react poorly to allowing it only for 6th edition codices, so that option is out, but then again, is the community ready just yet to accept the changes being presented to them?  I'm interested in what you all have to say, so let's open up some discussion in the comments section!

Once again, my name is Damon and this is my first article for 40k.  I have played in a semi competitive environment, mostly because of the small town atmosphere in my hometown, however living in Brazil leads me to think even more into variety in lists being that everything is almost double the price and has quite a delay to arrive, as well as the rules not being available in Portuguese!
4/19/2013
Natfka
This is Our Hobby