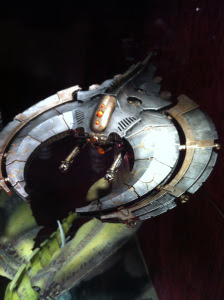 Forgeworld Open Day was today, and earlier we had a ton of pictures from Tykens Rift (thanks), and now we are getting down to some of the information.


First off though, there was quite a bit missing from the Citadel Miniatures Hall. A big thank goes out to Micheal for delivering this news for all of us that live on another continent, or simply just can't go to this event.

via Michael from the Faeit 212 inbox
First, there are a few forces missing from the Citadel Miniatures Hall:
All Dark Eldar
Eldar (all aspects)
Some Ultramarines
40k Daemons (but not greater daemons, furies  and some old metal kits)
Tyranids
Orks

Note: this is accurate as of Saturday (yesterday)
Now I know this is not exactly a reliable source of information regarding future releases, but the missing armies are generally in line with the current release schedule. And the presence of Greater daemons without the rest of the daemon forces seems to point to new kits for them.


Also, I got to talk to Simon Egan at the Open Day and he told me this:
He is finishing Fulgrim TODAY - he needs to do a little work on the face then it is going to be moulded.

Fulgrim has a similar expression to Angron (serenity didn't work).

Fulgrim will be at the Horus Heresy weekender in May.

He is moving onto Ferrus Manus next, and is working on him with Will Hayes ( Egan is doing armour and organics, Hayes the metal bits).

He said that he was doing Mortarion after Manus (I'm not sure about this, I may have misheard, as it sounds a little unlikely).

Each Primarch takes about 3-4 months to sculpt (so if the above is correct, then Mortarion could still be finished by Games Day)

That was all I heard from Simon Egan that is worth sending.

Finally, this is what was in the Horus Heresy display cupboards (you can probably find images of them already on the internet):

Fellglaive Tank (same as Fellblade, but without demolisher cannon and with a massive Volkite weapon for the main gun)
Palatine Blades
New Landspeeder (same style as Scimitar jetbikes)
Praetor with sword (probably paragon blade) and archaeotech pistol)
Praetor with same sword, terminator armour and Volkite charger
New Whirlwind (the launchers look like heresy infantry missile launchers, but way bigger and with cylindrical ammunition feeds)
Sons Of Horus Reaver squad (not sure what these are, need to check Betrayal, but they look like veterans with topknots and similar SoH iconography)
Heavy bolter and graviton cannon rapiers (graviton doesn't look like the one you posted the other day, but it is fairly similar)


Also worthy of note:
I saw some new Minotaur models on a display table, they had plumes like the Mk3 command set, bolters, capes and armour with Minotaur symbols)
There is a new necron model just like the tomb stalker, but with a weapon instead of head (at least, it look like that). It's called the Canoptek tomb sentinel.
4/07/2013
Natfka
Forgeworld, News Headlines