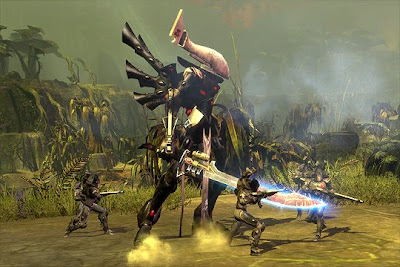 We have had a couple days now of exciting information regarding Eldar. Assuming we get this codex in the next month or so, there will be quite a bit of new models on the horizon, once again changing our game for years to come.

Presence of Faeit is my weekly editorial where I discuss what I am thinking about.


Eldar
Of course Space Marines if and when they appear later this year, would be the biggest release of the year, but I truly think that Eldar have the opportunity to come in a close second in that regard. The Eldar are an iconic staple of warhammer 40k that has been far too under represented at the gaming tables.

The last couple days has me going through the old codex and digging around in the fluff and units, with the anticipation of getting a 6th edition codex. I am going to be taking a decent amount of Eldar with me to the Valhalla event here a week from now, mostly as a battle brother ally of my Dark Eldar.

I think new flyers, and a large monstrous creature are what I am looking forward to the most, and really hoping that Wraithlords once again become a staple on the tabletop. (im hoping for skyfire upgrades for them).

Right now I am on the fence of ordering up me some Eldar Heavy Weapon sprues for some flexibility for what is coming, as I do not have too many Eldar bits for customization of my forces.

Vendetta Failure
The last three games I have fielded dual Vendettas, they have proven themselves pointless to the point of wasted points. In aerial duals, I have shot multiple rounds even late games into the 7 round, and still not shot down a single flyer with them. Now this has gotten ridiculous, as 6 incoming twin linked lascannons should be able to down a flyer.

Instead the only luck I have had taking down flyers has been from ground units when the enemy flyers get in too close. Twin linking up melta guns or fusion blasters seem to be the only method I have to take them down, with the occasionally well protected gun emplacements. Otherwise this using a vendetta as a double costed flying chimera is getting old.

Of course the odds are they will someday perform, but probably not before they get removed from my lists.

Painting and Battlefoam
OK, my order for my new case seems like its taking forever. Not that its late, but that I have been following the progression through UPS of my order, and it sat the entire weekend at the Portland UPS hub on swan island just waiting for Monday. So yes, I am just a little bit anxious to get the new case, and load up everything to get a better feel that everything I want to take will fit properly.

My painting is done for now, meaning that I am technically done and ready to go for Valhalla with a week to spare. Yes, I could paint more models, but to be honest, I am burnt out and done for now. Now I just need to get my case, cut out some raider wrecked vehicles markers from plasti-card, and be done.
4/21/2013
Natfka
Presence of Faeit