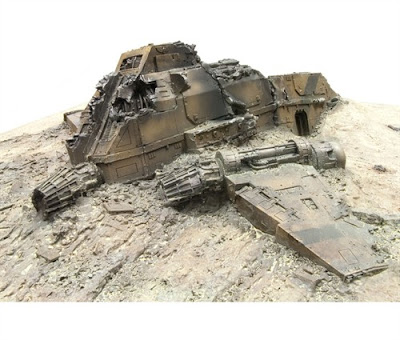 It's Friday and of course its time to take a look at what Forgeworld has in store for us this week. A lot of what we are going to see here, was showcased at Forgeworld Open Day, but that is no consolation, there is a lot of good stuff to be released.

Here is the Forgeworld #341


Hi there,            This is turning out to be a great week for Forge World. Firstly, we held yet another well-received Open Day at the weekend here at GW HQ. Then, hot on its heels, was our announcement that the new Imperial Armour Volume 12: The Fall of Orpheus is now available to pre-order.
So where can we go from there? Well, in today’s newsletter we’ve got details of a fantastic new Realm of Battle scenery tile and not one, not two, but three new Horus Heresy kits, which are all available to pre-order now, as well as news about the new Forge World 2013 catalogue and a couple of upcoming events.
Realm of Battle Crashed Thunderhawk

Debuted at last weekend's Forge World Open Day, the latest addition to our ever-expanding scenery range is the Realm of Battle Crashed Thunderhawk board. This board represents one of the mightiest of Space Marine flyers brought low; shattered and hurled to the ground by enemy gunfire. Created by Blake Spence, it has been painstakingly designed to show the internal structure of this legendary gunship after terrible damage has been inflicted upon its hull.This highly detailed new scenery tile makes a great centrepiece for your gaming table, a fantastic diorama base for your collection or, when combined with other Realm of Battle boards, allows you to fight some great rescue or last stand scenarios. The Realm of Battle Crashed Thunderhawk measures 2' x 2' (609mm x 609mm) and is available to pre-order now for despatch from Friday 3rd May.
Legion MkIV Destroyer Squad

Considered dishonourable by some Legions, who eschew them altogether or make little use of them, the arsenal of a Destroyer squad includes rad-weapons, bio-alchem munitions and the crawling horror of phosphex. These hellish devices, which irrevocably taint the ground upon which they are used, have been forbidden by the Emperor’s own edict, and with good reason. For during the long nightmare of the Age of Strife, many life-sustaining colony worlds were rendered barren by their use, becoming uninhabitable charnel houses where once these verdant planets held thriving civilisations.
It is little wonder therefore that those who wield these potent weapons of destruction are heavily protected from their effects – the fire-blackened and chem-scalded Destroyers being clad in modified and reinforced suits of power armour, essential to withstand the deadly rad-taint of their own weaponry. Often shunned and distrusted by their Legion brothers, the Destroyers are deemed a necessary evil at best during these violent times, yet none can deny the potency of their relic-weapons.
Will Hayes has designed the Legion MkIV Destroyer Squad, comprising a set of five multi-part resin models with five pairs of Tigrus pattern bolt pistols, as well as three phosphex bombs and an optional rad-missile launcher. Rules for using a Destroyer Squad as part of a Space Marine Legion force can be found in The Horus Heresy Book One: Betrayal, and this highly detailed kit is available to pre-order now for despatch from Friday 3rd May.
Legion Rapier Graviton Cannon and Quad Heavy Bolter

The Rapier armoured carrier is a semi-automated weapons carriage, equipped with on-board targeting systems and powerful generators. It is designed to mount support weaponry too large and cumbersome for even the superhuman strength of a Space Marine to carry, and the Rapier’s relatively small size makes it an ideal support weapon both in attack and defence.
The most common armaments of the Rapier are quad heavy bolters or laser destroyer arrays for anti-personnel and anti-armour roles, while Quad Launcher are favoured for siege warfare. On occasion, a Legion’s Techmarines will also use a Rapier carrier as a mount for more exotic weaponry such as a Graviton cannon.
Stuart Williamson has designed two new Rapier weapons systems. The Legion Rapier Graviton Cannon andLegion Rapier Quad Heavy Bolter are both detailed multi-part resin models, and each armoured carrier is accompanied by two Space Marine crew in MkIII power armour. Rules for using a Rapier Weapons Battery as part of a Space Marine Legion force can be found in The Horus Heresy Book One: Betrayal, and both these kits are available to pre-order now for despatch from Friday 3rd May.
New Forge World Catalogue Now AvailableThe Forge World 2013 catalogue is now being sent out. So if you’d like a free copy, please send your name and postal address in an e-mail entitled ‘2013 Catalogue Request’ to forgeworld@gwplc.com. A pdf version of the catalogue is also available here.
Forge World Events NewsForge World Open Day ReviewThanks to everyone who came to see us on Sunday 7th April for the Forge World Open Day. We hope you had a great time, and if you couldn’t make it but want to join us at next year’s event, this is a little of what you can expect.
Salute and the Horus Heresy Weekender 2013We are still accepting reservation orders for Salute and the Horus Heresy Weekender. This is the best way to ensure we have the exact product you want, packed up and waiting for you at the event. As with all our UK shows, Salute and the Horus Heresy Weekender reservation orders are pre-paid to make the collection process quicker and easier, leaving you with more time to enjoy the rest of the event.
Please telephone the Customer Service team on 0115 900 4995 to place a reservation order. We will require your name, a contact telephone number and e-mail address, along with the list of products you wish to reserve and for which event, and you will also need your card details to hand too. We’ll process the payment while you are on the phone, and in the week before the event you’ll receive a confirmation e-mail containing your order number. This is your proof of payment and you must bring this e-mail with you to claim your order. We must receive Salute reservations by Monday 15th April and Horus Heresy Weekender reservations by Monday 13th May.
Thanks,Ead BrownCustomer Service ManagerForge World
4/12/2013
Natfka
Announcements, Forgeworld, News Headlines