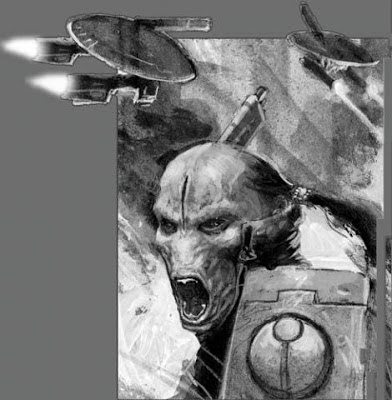 This is a true story that occurred alongside the Tau Release to a friend of mine at his local Games Workshop store. I thought this was worth sharing. Please excuse me if I miss a detail, as this was being discussed in detail after a late night game.

None of the actual names are being used.

The Story
The Order
A good friend of mine went into a Games Workshop store the week pre-orders were up, and ordered about $300 dollars of Tau and paid for them. After all as a long time Tau player, who wouldnt be so excited to get lots of new models. The order was placed on Wednesday.

Release Day
The release day came, and within the first hour of opening, my buddy was at the GW store excited to pick up his Tau models. He went in, and the manager who runs the store (1 man store) told him that his order did not arrive.

Now its worth mentioning that a friend of the managers was sitting right there with him, who obviously should of just kept quiet, but was rubbing it in to the customer that He had gotten his entire pre-order.

Now I understand that Tau models were and are hard to get right now, because to be honest, just not enough were made. However, now it gets interesting.....

Over on the shelf however, was every model that he had ordered. So of course he asked, "well can't I have those? I pre-ordered". He was promptly told "No, Those are not your models".

I personally find that odd, that he pre-ordered his models, there were models that he ordered on the shelves, and the manager would not give them to him to fill in the order.

So yes, he called Customer Service, who told him, that GW has no policy in place to make GW stores fill their orders with the models that were sent to them, and that he was going to have wait. Although he was told it was odd, and the store employee should of given him the models to fill the order. Now I understand that the order placed the day he put in his pre-order was not in. However, the models were there to fill the order on the day of release.

My friend literally would of been better off, not pre-ordering his models, and just coming in the day of release and buying the models. So this is where it gets even worse, or at least adds to the frustration.

Wednesday
He called back to the store on Wednesday to ask if there was a riptide on the shelves, and he was told yes. He said I will be right over to get it then (as its a long drive to the other side of town approx 30 minutes). When he arrived to get the riptide, it was gone, and the manager had just sold it to a customer that was sitting there putting it together.

Literally all he has been able to get is the codex. The rest has been a giant run around of a manager that really does not seem to have a grasp of managing a store. So literally my buddy is righteously pissed off, and still does not have any of his models.

So two trips to the other side of town, and no models. He was told simply that the manager would call him when his order arrives. Customer Service no help.

(now it was late, and I am sure I missed additional frustrating parts of this story)

Correction: He was able to get a codex and one Cadre Fireblade