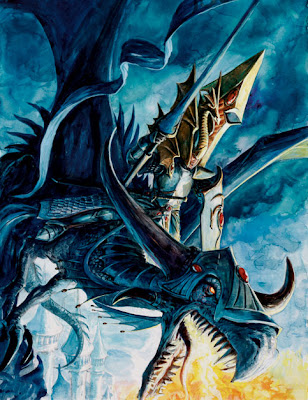 The flood gates are really open now, and the information is flowing rather freely. Here is another grouping of information apparently out of the May White Dwarf.

Please remember that everything is considered rumor until we get book in hand.

via Plastic Krak
Source #1
Well this is more than a rumour roundup, its more a confirmation of what we will see in the new book. I've left the extortion rates in another post (read - prices)

It is replaced with Always Strike first!
Martial Prowess and Valour of Ages remain

Deflect shots: Models with this special rule have a 6+ ward save against non-magical shooting attacks that do not have a template

Loremaster of Hoeth:
M5 WS6 BS4 St4 T3 W3 I7 A3 Ld9
L2 mage. Does not role for spells, instead it automatically gets the signature spell of all the 8 battlemagic lores

White Lion Chariot is stubborn, but only the charioteers get ASF

Dragon Mage stats are unchanged.
Reckless special rule grants them +2 to cast spells from the lore of fire instead of extra dice. Can wear Dragon Armour

Drain magic, 7+ to cast. Cast on any unit (friend or foe) as an augment/hex within 18". All RiP spells are immediatley dispelled, and the effects of ALL other spells on target unit immediately cease! Boosted to effect all friend/enemy units within 18" on a 14+

Lore Attribute: Each time a spell is cast, the caster and his unit gain +1 to their ward save (to a maximum of 3+). Models with no ward save gain a 6+

Flamespyre Phoenix comes back to life on a role of 6+. It requires a marker to be left in place so this either happens at the end of the turn/next magic phase or every turn. It deploys within 6" of the marker. Gains special abilities based on WoM rolls (owners turn determines). One result is 4+ ward save. Has flaming attacks and a special rule 'Wake of Fire', which means units it fly over take damage (in the battle report in WD it did 6 wounds to leadbelchers). It has at least 4 wounds.

Theres a special character/unique Phoenix called Ashtari. I think its the mount for Caradryan

Lothern Skycutters
3 variants: Eagle eye bolt thrower, trio of Lothern Sea Guard, or mount for new character type Sea Helm. They are pulled by a Swiftfeather Roc, which is a huge giant eagle.

Maidenguard are rares with magical flaming bows. They have the wychfire special rule (lets hope its not like DoC). They are not handmaidens!

Shadow Warriors are still special and still have the skirmish rule


Friend posted this in the HE forum on LO

Just got the new White dwarf

Units got the ASF rule still, but nothing about it overruling normal rules, so swordmasters and white lions will strike on ini, but no rerolls

Swordmasters got a 6+ ward against non-magical ranged attacks

Shield of saphery is lore attribute

4 other spells are Drain magic (signitaure), soul quench (also says signitaure.....), aptothesis and hand of glory. Text is very small, so hard to make out what it says, but I think soul quench is a magic missile with 2d6 str 4 hits on 8+, can be boosted to 4d6 hits on a 16+. Hand of glory is a reversed miasma. Boost either ws, bs, move or ini by d3 on a 5+, can be boosted (seems damn good). The other 2 I can't make out, nor the lore attribute

In the battlerepport, Matt Hutson is using an annonited of Asuryan (dunno if that's a fancy name for a prince or if he's got some special abbilities) and a loremaster.
Heroes are a dragon mage wearing a dragon armour (ooooh yeah) with a gem of sunfire, as well as a level 2 with Khain's ring of fury

Specials are : swordmasters and lothern skycutters (flying chariot thingies with eagle eye bolt thrower (note that it's not an eagles claw)

Rare are: flamespyre phoenix (other is frostheart phoenix, his Annointed rides on), 2 x eagles claw and 10 sisters of avelorn (girls with magic bows)

Oh and seems the BSB that's pictured isn't an individual pack, but can be assembled from the Lothern skycutter if you don't use one of the options


Will write more when I've had time to read the repport


edit: Forgot, the swordmasters are carrying the banner of the world dragon in the repport

edit edit: Phoenixes are affected by the winds of magic rolls in some way (he got a 4+ ward in the first turn) and can ressurect on a 6 if it's killed, leaving a marker where it died (he got it straigth away, so dunno if you leave the marker in place or if you only get one shot at it). Not much about the magic bow ladies, but in the afterbattle thoughts, Andrew kenrick (I think his name is) remarks on flaming shots, guessing they might be magical and flaming, but this is purely guesswork on my part. Seems it also got a "wake of fire rule" causing damage to units it moves over (makes sense I guess)

Handmaiden of avelorn is out, as is a new everqueen model, but you already knew that Nothing on wheter the handmaid is a character or not

Valor of ages is in, but nothing about what it does

Units seem to have martial prowess as well, but nothing on that either

The first spell a dragon mage generates will always be flaming sword, so seems he can default to a fireball spell with the other one should he wish it. He recieves no + to dispel and has a +2 to cast spells from lore of fire (recklessness)

Lion chariot is still T4 and 4W and a 4+ save (makes me cry). Got stubborn (can't remember if it used to have this as I never used it)

Oh and a uniforms and heraldry book is out along with the rest as well
4/24/2013
Natfka
High Elves, News Headlines, Rumors, Warhammer Fantasy