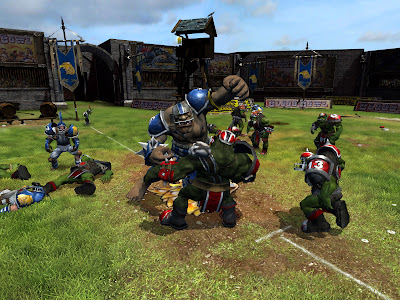 This fall we are expecting a new limited edition game, and its widely expected to be Blood Bowl. While there is not a lot new out on this one, I was sent in a little rumor bit that it was indeed Blood Bowl this year, with 4 races in the box.


Blood Bowl has quite the fanatical fan base, and I remember years ago, it being very big in the game store I often went to. Its been a long time though since I have seen this game, with the exception of some Ultramarine Cheerleaders that were custom done from models from Blood Bowl.

I went through and also posted below this rumor bit, what is known about the upcoming release.... a rumor compilation from Harry on Warseer.

via Faeit 212 inbox
Blood Bowl with four races in 2013. Wonderful miniatures with character!

via Harry on Warseer
I posted this lot in July last year .... seems I got a bit ahead of myself. Over excited.
As this year is the 25th anniversay of Blood Bowl 2nd edition (The one with the astrogranite pitch) I am confident this is happening this time.

I first heard about this in 2007.
At the time I was writing articles for The watchman and this is what I said in a rumours article:

Blood Bowl was first released in 1987 That would make this year its 20th Anniversary (if my dates/maths are correct!) There were a lot of updates to the ‘living rulebook’ (online). I think this activity may have been due to the intended re-release of Blood Bowl this year although I can not say this for certain (but I can’t see Games Workshop waiting 5 years until the 25th anniversary).
This is just a hunch. (For those that don’t know me from Warseer my hunches are wrong most of the time!)
Aly Morrison and Mark Bedford have been working on new teams for some of the races with all individual players like the new Human team. And I think a number of these are completed and ready to go.

So it would seem I was wrong about them waiting another 5 years then.

I later found out I was also wrong about the teams being completed.
They were only 'planned' at this time.

75hastings69 has posted to say Blood Bowl is coming next year so that will be in 2012 for the 25th anniversary.

He also said this:

So four teams of completely individual minis and a spammy new pitch wouldn't interest you?

As for rules why try and fix what isn't broken?
For those who don't know Hastings rumours are 99% fact.

So all we know so far is four nice new plastic teams, a new pitch and not much change to the rules.

Exactly what the four teams are has not been posted.
If the pitch is card, "astrogranite", plastic or cloth like the new Dread fleet also remains a mystery.

"The original rumours I heard on this suggested only two teams of individual models in the box - orcs & humans, it's only later mutterings I've heard that suggest there might be four teams."

I love Blood Bowl so have only one more thing to say ....

I said this in the last thread:

My understanding is that Blood Bowl is something different".

Now as it did not come last year .... and IS coming this year ... I am now thinking it will be the next LIMITED big Box game.

I have also heard from one source that he heard from someone else that someone they know had seen the CAD for a plastic pitch.
(So a really solid rumour! ) but I am imagining a cross between the astrogranite pitch and the battle board.

Finally I can confirm what hastings told us last year that two of the teams are Orcs and Humans.
But Like hastings I have also heard that there are four teams in the box.

I hear the story is that the four teams are the ones to make it to the play-offs for a specific cup/competition.

I love blood bowl too.... especially now my willy miniatures Chaos BB team is on its way!!

Originally I was told....

"It's not happening" due in the most part to the retail failure of Dreadfleet.