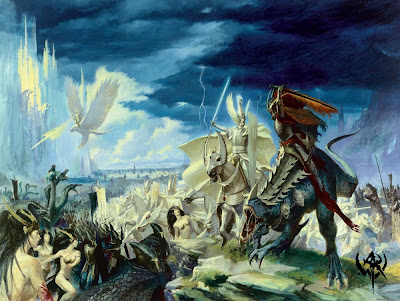 Leaks should be right around the corner for next month's Games Workshop release. In the meantime we are not seeing much information get out about what to expect.

Please remember that this is a rumor, so salt is required. In fact with this one, please add a little more salt than normal.

via TheRaven on Warseer (originally posted by Maelstrom on Ulthuan.net)
Some new rumors form a the Spanish site on Ulthuan.net. Maelström, the guy who bring rumours that has been proved true —such as phoenixes—, brought this morning —Spanish time— some new rumours. A lot of salt on them nevertheless, more than usually.

- Plastic huge Treeman —also can be used by WE—. It's been done since two years ago. It was thought only for WE but has been put into this wave for HE because of the lack of ideas.

- Plastic Maidenguard-Avelorn. They share with Shadow Warriors: heavy armor, shiled, spear-halberd as in LOTR, great weapon and magic bows. Bodies for male and female. Shadow Warriors wear helms and cloaks and they are scouts.

- Monstruous Infantry, ¿Elementales? from Changing Islands. Options for all four elements. Maelström says this is the first time he hears about that. He's also received an email talking about MC with eagles.