Talk about a large wraithguard type of construct or monstrous creature for Eldar is still going on. Hastings and others have said one exists, so all we can do is assume that is correct. So where can we find inspiration, or look for sources to give us hints on what this riptide sized model might be?

Well, like a lot of new 6th edition codices, we look to the past, to see what has been around.


Eldar Knights were and are from Epic. Its a game I never really got the chance to get into, but always heard great reviews on it. Here is all the information and discussion I could dig up on the subject.

The primary problem I see with them, is that they seem to be linked to the Exodites. Who knows though when it comes to a new codex what history will or background will be fleshed out. 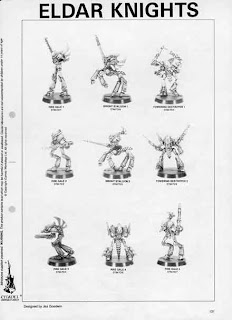 This information comes from jimbo1701 and Cypher on Warseer.
*Way, way back when, in the days of Epic, Eldar had their own variant of Knight Titans, which in 40K terms would be about the same size as the Riptide. So the big walker isnt that unreasonable.

*they actually had a psychic variant, which could be cool.

*the Eldar Knights were about 6x the size of infantry so yes it would be the right scale. The basic dudes were prefixed 'fire', the centaur ones 'bright stallions' and the largest 4-armed ones 'towering'.

Overview
Eldar Knights are most commonly used by Exodite populations to defend their homeworlds, and are complex machines made of a psycho-plastic known as Wraithbone. These machines were originally developed to help new Exodite colonies and Maiden Worlds survive against the hostile and grim conditions they faced.

Eldar knight suits are controlled by a direct mind-link between the pilot and machine, much like Imperial Titans. However Eldar Knights also contain a Spirit stone which supplies the machine with a personality as well as a way for the Eldar pilot to avoid having their soul consumed by Slaanesh should they fall in battle. The spirit stones of Eldar Knights are often ancient artifacts dating before The Fall.

In battle, Eldar knights are rapidly-moving war machines able to swiftly advance and lay down heavy fire to devastating effect. They are frequently used by Exodite populations to aid Craftworld Eldar armies, forging ahead of the main formation and attacking to secure an important position.

Much like Imperial Knights being organized around feudal houses, Eldar Knights are divided along Exodite Clans based from Maiden Worlds and Exodite Worlds.