Death From the Skies Goes Digital and Second Printings Arrive 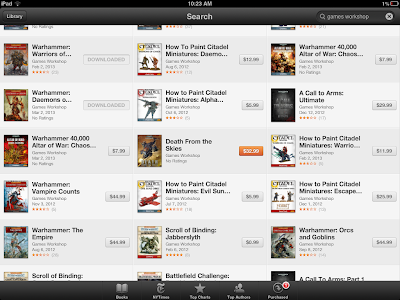 Death from the Skies went digital earlier this week for pre-orders and second printings have been noted as arriving at stores now. While its one of those interesting books, it was seemingly hard to get for awhile. So those of you still looking to get the supplement, you in luck.


As for pre-orders for the digital product, it goes live tomorrow on April 20th.

via a reader from the Faeit 212 inbox
I'm not sure if this is news or if I just missed the update but this week my local game store received a shipment of Death from the Skies (second printing) from GW.

via White Dwarf Daily
Good news iPad fans - Death from the Skies is now available to pre-order as a digital download from the Apple iBookstore. Packed with background information and rules for using your flyers in games, Death from the Skies is the definitive guide to the aircraft of the 41st Millennium. Much like its paper cousin, the Digital Edition features additional rules and scenarios for using your flyers in battle. The four new missions, which include 'Scramble!' and 'Aerial Assault', are a great way to theme a battle around your flyers, while the dogfighting rules allow you to represent the daredevil antics of your high-flying pilots as they tear through the sky. You'll find that races such as the Eldar and Dark Eldar have very elegant manoeuvres, while the Orks just try to ram other aircraft out of the sky.
4/19/2013
Natfka
40k, 6th Edition, Announcements, News Headlines, Warhammer 40k