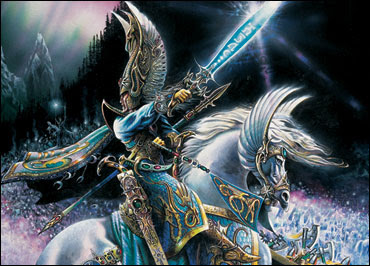 With High Elves most likely coming up next, it was time to lay out what the rumors are saying. So who better to get a compilation from, but Harry over on Warseer.


This is the latest Compilation, just remember that these are still rumors.

As High Elves are up next ... and folks have been asking for a thread ...
I figure I might as well revive my old High Elf rumour round up thread.
This lot was posted start of July last year ... not much more to add since then.
If anyone knows anything that needs to be added ... give me a shout.
Otherwise ... have at it.

High Elves:
Release Date: Unknown
The next army to be done after the Warriors of Chaos release.(Harry)
This would make them sometime early next year.(Harry)
High Elves early next year. (Meltedwing) I said it first. (Harry)
So ... High Elves are after WoC AND Daemons of Chaos ... but before Lizardmen.


Author: Unknown.
The book is rumoured to have been started. (Harry)
There is a rumour from Ghorros over at the Herdstone that Adam Troke was asking about what folks wanted from the next High Elves book. Could be nothing. Could be he taking another swing at High Elves. This is a possibility as I heard Adam moved from his job on the web team back to games development about a year ago. I assumed this was Lord of the Rings related but it could just as easily been because High Elves were back on the menu.
There is no solid information on who the lead writer might be.

Rules:
There are no rumours about the content of the book.
Imrik making a return, his inclusion possibly acting like Skrag but for True Dragon Princes. (This ties in with the popularity of the Caledor novels depicting mass dragon combat, the Storm of Magic novella, AND the Graham McNeil 2 part novel.)(Actuality)


Models:
There has been a suggestion that there will be a flying Chariot. (Hastings)
Monsterous Cavalry (Skeith over on BoLS)
The monstrous cavalry are a form of lesser wingless dragon, akin to the demigryph.(Actuality)
Dragon Princes riding some form of true dragon, (possibly limited to a sun dragon) Possibly in sets of three. (Actuality)
(This reminds me of a rumour from last time the book was done. There was a rumour of 'Drake riders' being sculpted by Alex Hedstrom. (Harry)
Both High Elves and Wood Elves may get the rumoured Treeman in their updated books. (buzz0783) This does not seem very likely to me. (Harry)
A new everqueen sculpt coming possibly riding some kind of 'critter'. No mention of Maiden Guard. (Eldargal UPDATE: Now doubting the credibility of this source)
Plastic kit for archers, spearmen and seaguard all in one box. (Bramgaunt)

"If I am to believe what I am told

Silverhelms, Tiranoc chariot, ellyrian reavers and shadow warriors are moving to core
Shadow warriors becoming BS5 (keeping ws5) and have additional hand weapon. loss of hatred though bar vs dark elves
Were getting War lions as a special choice (same as storm of magic but maybe 14pts, +2 for vanguard)
Lion Chariot moving to 100pts
Rare Phoenix model like out of storm of magic. might be more like a unit buffer. something like an alter/Anvil
Dragons becoming cheaper or stronger. T8 Star dragon with 8 wounds.
ASF is probably staying the same but some units reduced in prince to compensate its lack of use (like a mage)
+1 to dispel staying the same
Drain magic will become out sig spell
Shield of saph can be buffed to cover all units in 12”
Monstrous Cav will be in the book…but nothing on weather its giant lions or Drakes
NO flying chariot
Teclis to become even better…but points to go up a lot to price him out of 2500pt games
Lords and heros being able able to take things like lion cloaks"

UPDATE:
These rumours have been brought into question by hastings.
Hastings has said that not only is his flying chariot rumour accurate but it is pulled by Eagles.

I will add that I heard that the chariot has a special character option. (No big suprise there) can't remember where I heard this. (Harry)

UPDATE:
Indeed, in spanish forums people are discussing a huge pack of rumors since a couple of weeks ago.
Belannaer may return.
There will be new model to Imrik in a huge dragon (Caledor Dragon?), according to rumors.
Hastings' flying chariot do exist, but may not be pulled by eagles.
There will be a shrine/anvil (similar tu lumynarch/hurricanum) of two known elven gods. Some buffs could be magical attacks/flaming attacks/ASF.
Dragon MC will be modelled taking Thaindon's dragon as inspiration (that elf dragon rider from the 3rd edition). Like current HE plastic dragon (which takes inspiration from a very old GW dragon).
Do not expect to see spears/LSG core units in may. The rumor holds truth, but that belongs to a further miniature wave. "Silver boys" coming later on too.
ASF will be lost as rule armywide (Harry said that alredy). This would mean a slight point decrease on miniatures.
A less likely rumor talks that there will be a "Caledor dragon", apart from current dragons.
SMs may have a path-choice attacks (+1 to hit/KB/ward save...), lions being slightly more focused in monster-killing; lion pelt would protect also in CC.
Apparently there will be new miniatures for Teclis and another "plastic mage (Belannaer we hope)".
Plus: intrigues at court coming back (maybe different from 6ed), no valor of ages (probably changed into a new rule). There will be a new racial rule shared by all elves (we are discussing if this could be something related to elven swiftness).
There will be more core units (probably four or five slots), and more rare slots (probably three to five slots).
Cruddace was not the HE designer, and a team would be working in all three elven races at once.
Remember, all this are just rumors. Source wants to be anonyme. (Nopuiiidorl found these posted by someone with an anonymous source on a spanish forum).

Update from Best_Pone
I can confirm the flying chariot. It looks like a tiny boat with wings, and is pulled by a single giant eagle. It looks kind of silly in my opinion, but not much that can be done about that.

As for the phoenix, it can be made up either as a fire phoenix or an ice phoenix. This one at least look pretty cool (or hot, depending on the option you choose I guess )

I won't say how I know but I can say that the next army book will be High Elves.

They have a number of new things.

Flying Phoenix's (Frost and Fire) that can drop flame templates on units they fly over. Gets abilities based on what is roled on winds of magic
Great Eagle towing chariots (Which can have bolt throwers on them)
New Highmage of Hoeth (Swordsmaster/mage) Gets every signature from all 8 lores.
Everqueen
Silver Helms as Core
Martial Prowess across the board
Archer units with magical bows
Swordsmasters get a parry save vs shooting
New Shadow Warrior Models
The White Dwarf battle report is vs Ogres.


NEW STUFF:
-HE are going to get a new war machine that mixes RBT and dragon breath/flamethrower. Nobody told Maeltröm if its something independent or part of one of the flying chariots. He thinks that maybe a new war machine.
-Some people now say there will be no MC, so maybe no dragons. Others, instead, keep saying there will be and they give very explicit details. Maelström is confident they can be one of the releases, since if they exist not there will be few new boxes and having two different infantry boxes is both unlikely and unnecessary. He will keep digging to see what he finds.
-Next magic items disappear as you know them nowadays: Star Lance, Dragon Horn, Armor of Caledor (=Imrik coming back?). There is a new magic item: Book of the Phoenix.
-Dragons have awaken. More and more powerful dragons. Imrik is coming back.
-Phoenix King is going to battle.

BLISTERS (some to be seen on may, others in the future, others never). From MORE likely to LESS likely:
1. BLISTER Warrior Mage (some say with option to build Belannaer)
2. BLISTER Alarielle
3. BLISTER Teclis
4. BLISTER Random hero

PS: Maelström's left apart some things that we are not likely to see in years such us SHs, Spears, SMs, New Griffon and the like. He insists on saying that new release will be: 4-5 boxes and 3-4 blisters, plus book and cards. No surprises (we already know almos everything about that very point). Anyway, it will be WHFB 30th anniversary, and elves are an army that needs something flashy that we haven't seen yet (as happened with Empire), and there may be a surprise.