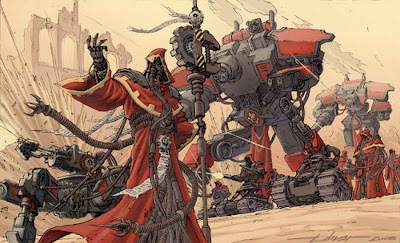 There are a few rumors that I have been holding onto until after the Tau release, and this is one of them. The Mechanicus Adeptus are one of those mythical notions alongside a plastic thunderhawk that many people in our hobby would love to get. However it seems rather far fetched that a mechanicus army would ever appear.


Its really too bad that there is no Ad Mech army for 40k, as there are many times in the books and novels that they make an appearance. There is also a ton of background that you can dig up on them. There is even several instances of hobbyists making custom making entire armies with a lot of sculpting going on.

So why isn't there a Mechanicus army? Is one planned down the road? This little rumor bit says yes, although I do not know if its meant for Forgeworld or Games Workshop.

Please remember that this really needs the extra salt before reading. Rumors are rumors.