Home » Fiction » Devil Nacht is Upon U

Devil Nacht is Upon U 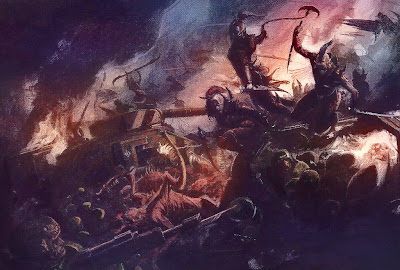 The screams filled the night, . There were no alarms, no warnings for what befell us. The still night had erupted in terror, and there was nothing and no one that could save us.


I had been wounded in the initial strike, the burning toxins ravaging my body. As I lay there in the darkness being consumed from the inside, only the screams were able to break through my delirium.
Soon my body had broken, the screams that were my own subsided.  I felt warm, the cool breeze of the open air on my face. At last I had found the respite of my own death, and I deftly welcomed it.

Intent and welcoming, I open my eyes to see the lithe armored warrior that had claimed my life. I am without feeling, and he can sense my relief.

While his face is covered by a helm that hides his features, I see the gleam in his eyes, the hunger. The pistol is already in his hand as he lowers his face to mine. The world erupts with ear piercing screams, new toxins anchoring me to this world, to begin my torment anew. The screams fill the night, and they are mine.


I am in route to Valhalla, so thought a little themed story was in order. I believe I wrote this last August when I needed a sick day.
4/29/2013
Natfka
Fiction