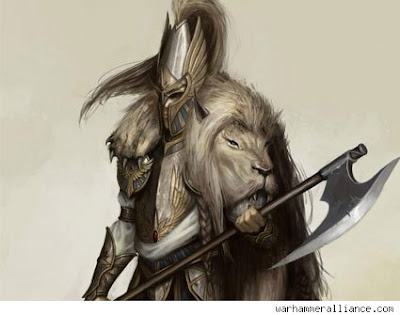 In a few short hours the latest White Dwarf will be released, and everything inside it will be scrutinized to the minute detail. So lets get a jump on some of the information for High Elves.


Please remember that while this is said to be coming out of the White Dwarf, its still a rumor until we get the magazine in hand.

via Sir_Glonojad over on Warseeer
So, White Lions seem to not have any stats changed. They have ASF, freely move around areas with a lot of trees, MP, "lazy" , VoA.

I have problem reading the stats of the Chariot  and the rules are: ASF for crew, can make you tremble, "lazy", VoA.

Dragon Mage's stats seem to have remained the same, too. He casts fire spells with an extra +2 bonus but never receives dispel bonuses. The first spell generated is always a lightsaber... err.. You know the drill .

Swordmasters' stats are so blurry I am not sure of many of them but their high WS and number of attacks is intact as far as I can tell. Standard SR plus a certain Jedi trick.

Loremaster stats are even worse (to read), but seem to have Bladelord's stats with lordly Wounds and Strength of a Prince/Noble. They're level 2 wizards from the start. Can't generate spells - they always get the eight "typicals".

Nothing of note can be said about the Militiamen, but this entry does not include the Lothern Sea Guard.


- Imrik is in the book and it rides a dragon with next attributes:
15,9,0,8,8,1,7,9 Saves:2+/5+, S5 template, Lvl 2 mage
- All dragons can choose Lore of Fire
- Banner of the World Dragon remains
- Book of Hoeth is renamed (same cost). Gives irresistible force with doubles and Loremaster
- There is an expensive weapon that gives +3S
- Dragon Mage wears dragon armour
- No dragons on rare units