Imperial Armour 12: Fall of Orpheus: Rules and Pics to Tide you Over 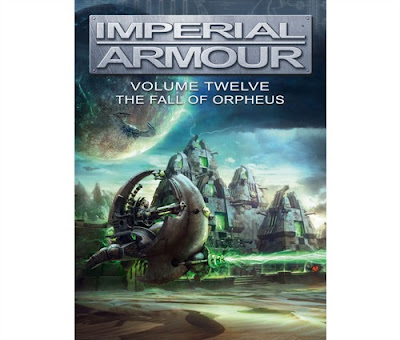 I know a lot of people are excited to get this book, as it was available during Forgeworld's Open Day, and is only available for pre-order for the rest of us. Here are some pics and rules within that just might hold you over until the book is released.


Friday May 3rd is the release day for Imperial Armour 12. So its right around the corner. You can get your pre-orders done here at this link.
http://www.forgeworld.co.uk/New_Stuff/IMPERIAL_ARMOUR_VOLUME_TWELVE_THE_FALL_OF_ORPHEUS.html

Kutlakh Stats
5,4,5,5,3,2,4,10 2+
He has a Staff of Light and The Obsidax
The obsidax is a close combat weapon with the following profile:
Str as User (5) Ap 2, Instant Death, Specialist Weapon.Wargear:

Splinter of Madness: Kutlakh must declare challenge(?). Before the challenge both combatants roll a D6 and add their leadership.

Special Rules: IC, Ever Living and RP, Adamantium Will, Must be Warlord in a 'new-necron' army and has to use a specific trait (probably 3), Phaeron, Unit joined by Kutlakh has Fear and Fearless, Phaeron

May take a Command Barge

He must declare a challenge...
Before the challenge takes place both combatants roll a d6 and add their leadership If Kutlakh's total score is greater than that of his opponents, his opponent suffers a reduction to their weapon skill for this assault phase equal to the difference. Opponents reduced to 0 cannot fight this phase.

IC, Ever Living, Slow and Purposeful

You have Cron-Warlord-trait 1 if Toholk is the Warlord. (Reserve thingy) always gets the +1 or -1 to your reserve rolls if is your warlord, unit joined gains night vision and cannot be blinded, may also reroll a single D6 in each of their turns, other ability at start of game roll D3, this amount of vehicles in your army get the It Will Not Die rule and regenerate Hull Points on a 5+ of which you choose.

10 warriors in a unit minimum instead of 5 no points difference with the Maynarkh units compared to their standard counterparts, need two troop choices filled in before can use Immortals ie they cant be used in compulsory slots as they are classed as rare in the Maynarkh army but really its just so people field more Flayed Ones.


New Scarabs called Charnel Scarabs have Shred and Rending but no Entropic Strike, WS improved to 3 from 2 and is 20 points a base so extra 5 points to upgrade to Charnel type, everything else the same.

Tomb Stalkers are elite now as the new Tomb Sentinel is in the fast attack slot.


Tomb Sentinel its 195pts
T7 beastie with 4 wounds
MC
Fearless, Rampage, War Construct and Phase Tunneling
Armed with and Exile Cannon
Rg 12" Str X AP - Heavy 1 Blast
The number of models hit under the template have to take a strength test or be removed no saves allowed. It is random which models are hit.
Phase tunnelling gives Fleet, Deep Strike, Outflank and Hit & Run (interestingly its I 4 no doubt so it can use this ability as most cron stuff is I 2)
War Construct makes them immune to Fleshbane and Poisoned rules.
Optional upgrade Sepulchral Scarabs means it gains it will not die!


Tomb Stalker is still 205pts but i still think its better due to the rules it has than previous ones.

The Tomb Stalker has lost 1 wound from 5 down to 4 and the Brutal Assault rule which gave +2 attacks on the charge instead of the normal +1, also the War Construct rule has changed slightly which allows anything that doesn't use Fleshbane or Poison rules to harm it normally but no real biggy there or atleast not for me.
It has gained the Outflank special rule to deploy from the sides depending on the dice number rolled and the Acute Senses rule so it can reroll this dice, very handy and makes it much more or a threat, if it is in an assault and the enemy is more numerous (ie not a single model unit) then it gains the benefits of the Rampage rule and adds +D3 attacks so potentially 8 S6 AP2 attacks against squads if it charges and 7 if not, unfortunately it does mean only 3 smash attacks where previous it was 4 but who needs help destroying vehicles these days anyway.
To make it even better it can add Gloom Prism and Sepulchral Scarabs for 15pts each, Gloom Prism to help against psychic abilities on a 4+ just as the Tomb Spyders do and the Sepulchral Scarabs mean it gets the It Will Not Die rule and on a 5+ gets a wound back at the end of your player turn.
The Outflank and Acute Senses means i would probably take this over a C'tan Shard as it will likely be able to attack on the turn after it deploys instead of 2-3 turns moving 6" then running while getting shot to pieces and it would be fun to tease my opponents with as to which side it will tear up, going to try this on sunday to test it out.
Charnal Lychguard
225 pts for 5
5-10 a unit, 45pts base per model, Swords and Shields +5pts, comes with Rage, Fear and only one unit allowed per Overlord in the army.
Warscythe armed
Have Rage and Fear
Soldiers of the bloody court: Only 1 unit per Overlord in the Army
Can add flensing scarabs giving them shred
Can exchange warscythe for shield and sword like normal lychguard

The Gauss Pylon (Apoc) is mostly the same.
One change:
Flux Arc used to be heavy D6 to all enemy units in range.
Now it seems to be 2D6 to one unit only!


Necron Tomb Citadel
300 pnt fortification for 40K!!!
The two big buildings are both AV14 and each penetrate results into a D6 (5+ destroys it)

Ziggurat:
has both Eternity Gate and Scarab Hive (check Codex! Scarab Hive is broken when you roll a 1)
docked Monolith or Sentry Pylon fire with STR+1
If destroyed, the docked machine takes STR10AP2.

Optional:
Comms Relay for 20
Up to two Tesla Destructors or Gauss Exterminators with Skyfire/Interceptor for 65 or 100 each.

Minotaurs get a new vet Seargeant Hamath Kraatos 60pts
Replaces a devastator seargeant
Armed with a heavy bolter which can be fired normally or with the following profile:
Rg 48" Str 6 Ap 3 Heavy 1, Sniper
Signum: one model in the unit can count as having BS 5.
He also has prefered enemy

The Dark Harvest army list can be taken as Allies of Convenience for a Necron Codex army or vice versa so the usual things apply ie cant join the other necron codex characters to the Dark Harvest units etc.

The two HQ's and the changed units like FO's and Lychguard are only for a 'Dark Harvest'-list.
But you can use them as allies even though Necrons usually can't ally Necrons!

Can be used with as an HQ choice Space Marines, DA, BA, SW and BT
Can bring in orbital bombardment once per game Str 10 AP 1 Large Blast, Barrage.
Teleport Beacon units arriving from deep strike within 12" do not scatter
Command Vox Relay
Allows player to add or subtract 1 from all reserve rolls 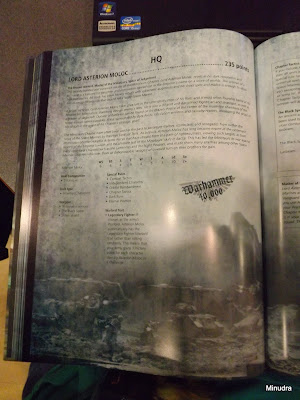 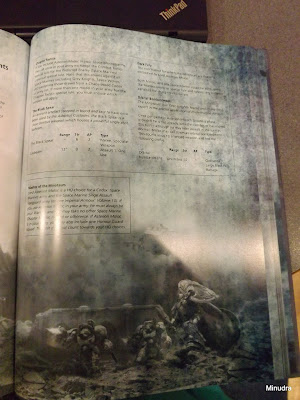 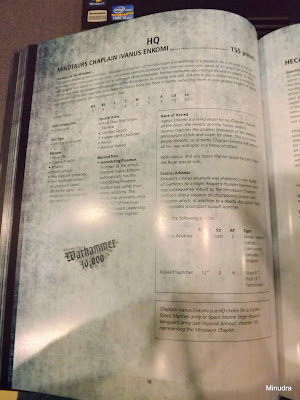 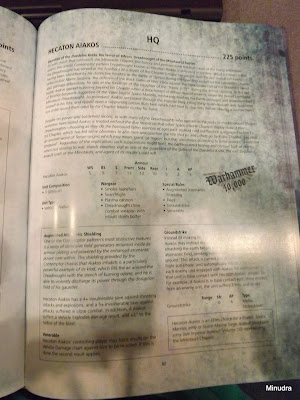 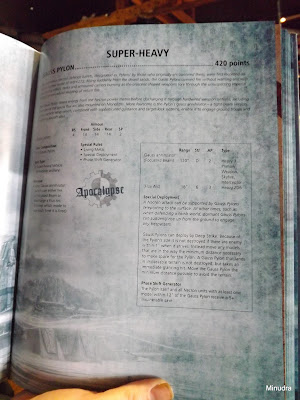 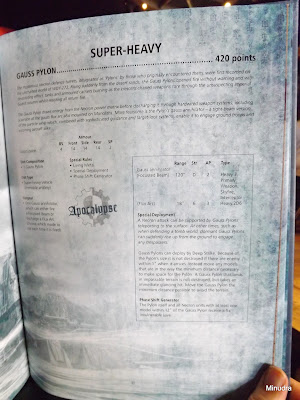 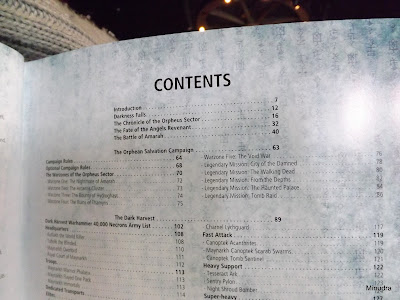 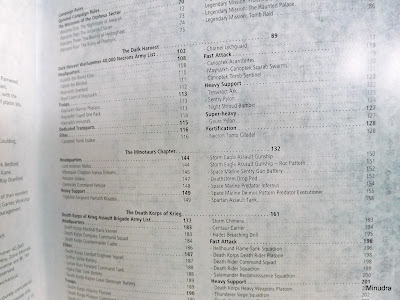 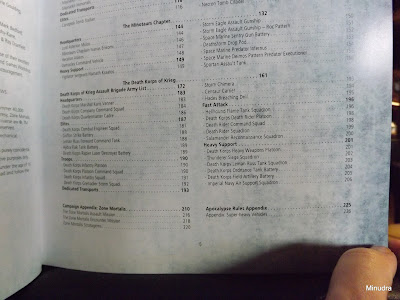 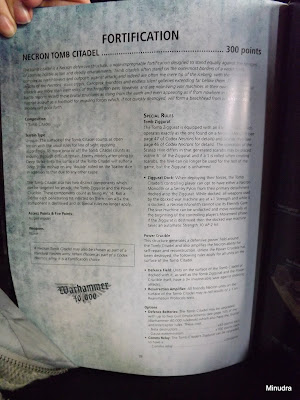