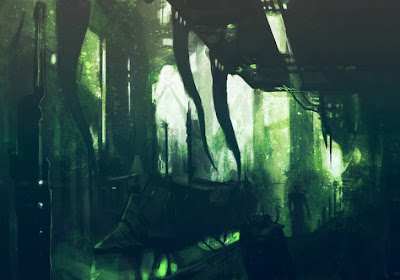 The rumor mill has been in full swing, and hobby wise, I have been a painting machine. I am really working hard though for the first time on getting my Dark Eldar all painted up and ready for battle. While there is still a lot of work to do, any forward progress is always fantastic.


Eldar
I am just dying for an Eldar release. I am trying to stay contained, but really.... the large uber wraithguard will mean "I need 3". Without even knowing anything about it, I will be pre-ordering this model when it release day.

I have been receiving quite a bit of eldar information of late, I just wish there was more that was 'safe' for posting up. From what I have seen, there are going to be more than a few nice surprises with this codex release.

With new Eldar rumors coming our way over the next few months, there will be a very vigorous effort on my part to find any information I can on them. I am expecting an amazing book, both in artwork and variety of play. With two new flyers and an Uber Wraithguard model coming, I am already saving for a large purchase. Of course I already have money saved for the Voidraven, but that is another issue......

Dark Eldar
My Dark Eldar models are old. I own very few of the new models, as when the last codex was released, I already had 7-8k points of Dark Eldar models. I of course did get some, and continue to do so, but my old Dark Eldar models have a special place in my 40k hobby collections. They were my first army.

So with that here are some pics of my models. These were just taken quickly, because there is still a ton of work to be done, especially on the Raiders. I want to get them all done and ready for transport in a few short weeks for the Valhalla trip. (I will be taking some Eldar and Grey Knights as well I think). 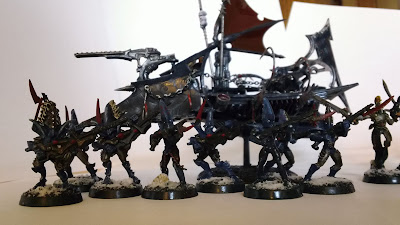 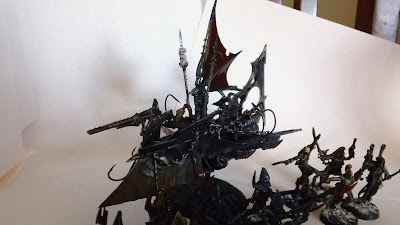 As you can see my raiders on very old bases and the model has some very serious TSA flight issues. This model is 6" tall with the sails. While the footprint of the raider is larger than the current raiders, its also a not as wide as the Oop models.

The Warriors I trimmed up. Cut down on the spikes and weird helmet blades. I was going for a sleeker and more Eldarish feel for it, but these models can only give so much.

Also in the pic are my Harlequins, which I have been using a lot.

When I get the raiders finished and more of the army completed, probably a week or two out, I will sit down and take some better pics.

Rumors
This week we were discussing the release schedules and of course some new rhino variants with Hastings and our own rumor checking sources. There is a lot coming, and while I do not expect to see another codex after the tau right away, we are definitely looking at 1-2 more releases this year. Eldar and Space Marines?

I would love to get Space Marine codex armies back onto the field of play. There just is not enough of them anymore. I know that sounds odd, and perhaps its just an isolated few months since my move into the new house, but I really like seeing standard marine dex armies on the tables when I walk into a game shop.

Space Marines with a new codex with a few new units like the rumors are suggesting would throw Space Marines back to the top, as they already have a huge advantage in the number of marine units and their variability. Having a flexible codex is huge, and while 6th edition codices are much better at this, a Space Marine release will be this on steroids.

Tau
This will be a huge week for the Tau. Pre-orders are going up now in less than a week, and I expect this to be a crazy week of images, rumors, and anything else Tau. I would love to see more images of the Riptide, and of course the new flyers. Not to mention that elusive cover art.......