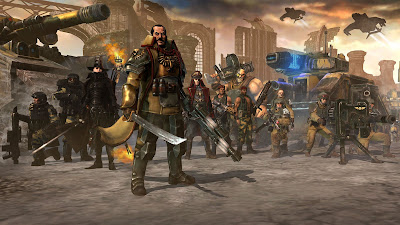 Hastings has been busy and has expanded up on this release order, bringing us through probably mid next year.... although no time table was given, just the order of things. Of course Hastings word is considered canon, by not only most of the online community but by myself as well.

The Allied supplement rumor has been floating along for quite a long time now, and with this, unless more comes to light, it is dead. "There is no Allies Supplement".

This list also appears to correlate with what we had been hearing is in playtesting. So exciting times are ahead!

Please remember that while rumors are rumors, Hastings words tend to be Canon.

75hastings69  over on warseer
There's no allies supplement. So I'm not sure when we might see this kroot monster that 2 people have seen.

Release order discussion from warseer
MajorWesJanson
Tau are next, then Eldar. Sisters, Templars, Orks, and probably Nids need books before IG does.


another posted question
I was under the impression it was Tau, Eldar, Orks, SM, Nids, then Guard?