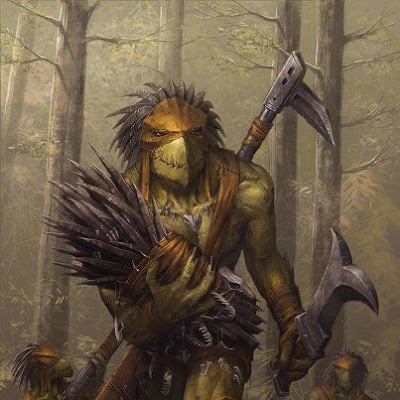 There is something missing in the Tau codex bits we have heard....... Kroot. We very much expected them to be expanded upon, and yet there is nothing really new that we have seen so far. Are Kroot even in the new codex? What is this Allies Supplement we have been hearing about?


The Kroot may very well be in the codex, even if its in the same form they are now currently; one or two entries. However, there are rumors that an allied supplement is approaching, and this is where many allied forces (secondary detachment type) will be dealt with and expanded upon. The Kroot could very well be here in force, as well as the Gretching, Vespid, Genestealer Cults, Eldar Pirates, Renegade Guard, and much more. The rumors certainly point to something like this being worked on.

So I dug in a little bit, and dug up a little bit of information regarding rumors for an allied supplement that should be approaching us very soon.

I am sure there is more good rumor bits on this site somewhere that I have missed. If you run across some please link in the comments.

Calistarius in the Faeit 212 Comment Section
March 18, 2013 at 8:47 AM
From what I've heard of the allies codex - don't take this as gospel - but the whole point apparently is to take an element of existing 40k forces, so for example Eldar pirates, renegade guard and possibly Kroot, limit them in some fashion but allow them to keep the same flavour, and in exchange they're battle brothers as you're bartering/trading/enslaving them.

My own theory on this is we won't see this until after codex Eldar, maybe even Orks, and this is why the xenos forces are getting a lot of love recently. So when the allies dex is released, all the special rules and abilities they get will be reflected in the existing codices. Final point, I believe this is where SoB will be going, and suspect Assassins and Legion of the Damned will be in it as well. I guess the grot list might be in there too but I honestly didn't ask as this conversation I had was several weeks ago.

StraightSilver on Warseer August 3rd 2012
As for an allies supplement, I was told that next year 40K will have a release very similar in format to the Warhammer Fantasy Storm of Magic supplement. In other words a book, cards and kits that could be used in multiple armies, in the same vein as the monsters from WHFB.

I assumed it would be a big supplement for Psykers, but it could just as well be for allies, as that seems to be the best way for GW to produce new kits without having to invest in a full 'Dex for them.

Now I hate to put Summer into any rumours, but I believe Storm of Magic was released about that time, which would put Tau and allies around June or July ish? However rumours strongly point to Eldar being early in the year, so I'm not sure if we would get 2 Xenos Codexes back to back? Unless GW really are going to do a release every month.

Kroot and other existing allies are there, however they are limited. There appears to be an "Allies" supplement which will be out about the same time and include many more options. (aside: Dare I start a Spring of Allies moniker...ah well then it will end up being 2 years from now...  )
My sources are telling me kroot are in fact still part of Tau, and have a new unit or two including a beastly transport. They may have more options in a later supplement.
I also checked into the demiurge rumors, and was told "There are no demiurge in the Tau codex."