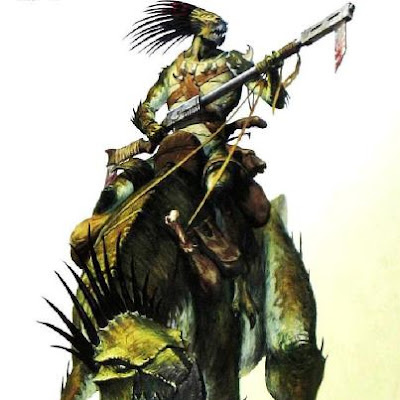 We have some rules coming to us now, and yes, it looks so far like Kroot might be missing in action until a later time, and yes..... the railgun is S8 AP1 with a Broadside sitting at 85pts for the Skyfire option. A lot of rumor bits are looking good.


These come to us from Kirby over at 3++. You can head on over and see these for yourself by following the link. http://www.3plusplus.net/2013/03/more-tau-picturez/

*All Ion weapons have a 'supercharge' option but at a risk (gets hot?). Drones can have Ion weapons.

*Interceptor drones are in! heavy drones with actual weapons AFAIK. They are a FW unit iirc which has been moved to 40k.  there are 6 drone types (see below).

*Supporting fire allows other Tau units within 6" to overwatch a charging unit as well. Not sure if this is all Tau units or just specific types.

*Markerlights are for all intents and purposes, the same. Buff BS, remove cover. BS can be buffed for Overwatch but not sure if this counts for Skyfire, too

*I haven't heard anything about railcannons for the Riptide. It starts with a Burst cannon (of giantness) though and can buy a Skyfire option.__In the pictures we can see underslung plasma rifles with the burst cannon.__IDK base cost for Hammerhead but that appears to be about right. I'd still imagine one hammerhead + 2 broadside units with the info I have but it might go the other way, too.

*6 different types of drones.
Grav inhibitor
pulse accelerator
recon drone (which can fit in the turret cupola of a devikfish and provide communication relays and fire support)

*Cadre Fireblade -
IC with split fire, markerlight, supporting fire, volley fire (+1 shot for Pulse Rifles/Carbines if unit and IC do not move).
Upgrade for Fire Warrior units - not sure if an actual IC or just has LoS! properties, etc.

*Pathfinders compete with fliers so I'm guessing no option to move them and they stay in Fast Attack.

*Riptide is an Elite choice

*85 pts gets S8 AP1 Skyfire for Broadsides; same statline
railguns are now S8 Ap1 base - rail cannons are S10 AP1.
The way the ruling works is at the beginning of the shooting phase they can choose to have skyfire or not.
No beam railgun shot

*Kroot?
There were some solid thoughts on Kroot before with rules, etc. but since they might not have new models soon, they might not want to showcase them. But yes, quite possibly they have been cut until this silly ally supplement book which would be frustrating but that would be very strange as GW generally never removes units from books.