The New Price of E-Codices 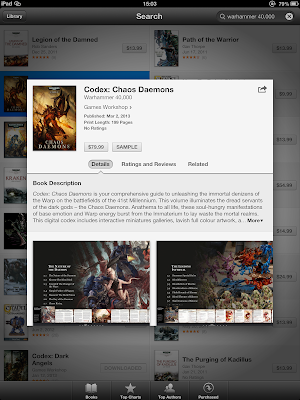 Electronic codices look like they have gone up in price in Australia. While I do not generally track prices there, (I just know they are much higher than elsewhere), it seems that digital codices have increased in price dramatically.


I have received a lot of emails on the subject, but really, the pic above says it all. Here are also two of the emails sent in on the subject.

via Ben from the Faeit 212 inbox

G'day!
I have been lurking on your site for awhile now just sitting back and enjoying. With all of GW's odd policies going on at the moment I was shocked when a friend told me to check out the prices on their e-codexes. I have 2 of these previously for around $50au, which for me I thought was expensive but given a book was $79.99 a better alternative. Especially when you consider they update with corrections. My Space Marine Codex has the Stormraven in it for example.

via Ryan from the Faeit 212 inbox
i just checked my ipad store to see that the price of the dark angel and codex chaos daemons are now 79.99 AUD while the rest remain the same not sure wtf is going on but thought it noteworthy.