This is Our Hobby: Homemade Rules 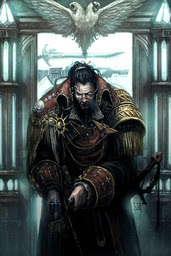 Homemade’ Rules
Throughout my time playing Warhammer 40,000 I have felt the need to create my own ideas and fluff, and sometimes one of the many ideas running, flying, and awkwardly lurching around my head actually makes it onto paper. When they do, I often feel another need, a need to apply rules to these new creations.

These questions make rules creation complex and arduous, especially when considering that final question. When I recently started writing new rules this prompted other members of the club I attend to do the same. Their efforts ranged from writing rules for a single model from a novel to creating an entire new army and codex. Upon reading these rules, I was struck by another important question: what should drive the creation of new rules? Because what I found with my friends’ rules is that they seemed driven by what would make a powerful model with which to wreak untold destruction, rather than the need to give additional shape to a character with an already formed look and background.

See, I personally feel rules should be made to fit a model, rather than having a model made to fit the rules. For me, following the latter path is simply an excuse for creating an overpowered monster,with which to crush inexperienced opponents who have little idea of the model’s true power (obviously, I am sure this is not always the case, but it is just what I have found with my limited experience). This doesn’t seem to fit in with the spirit of the game, and evidently Games Workshop feel the same way (as it is widely known that they put the models before anything else).

Personally, I always come up with the idea for a model first, fitting them with a background, history and fate before even writing anything down. Only then do I contemplate how they will work on the tabletop, and by this time I probably have an idea of what they will look like. Take this as an example: one of my most successful creations has been an Ordo Xenos inquisitor. I was inspired by John Blanche’s unique style with inquisitors and warbands, so actually developed the model first, establishing background as I did so.

The model went very well, and once it was finished I started writing rules. These rules were largely influenced by the look of the model, and more unique rules came from the history I had created. However, despite my best efforts, the human and human-sized model still ended up at 300 points, and carved his way through a Hellbrute and Chaos Terminator squad in his first game (I have since ‘nerfed’ him a little, and he now sits at a mere 280 points).

As you can see, it is too easy to get carried away with rules writing. And this is the snag. How can we monitor ourselves, so that when writing rules we don’t get carried away? And how on earth can we then try to use them in games, with the opponent’s consent? Who are we to judge how many points an indestructible avatar of destruction must be? In my case, I feel that the rules I gave my inquisitor were more or less justified by his history and appearance, after some chopping and changing (eventually I removed a Horus-like ability at accurate teleportation, and more recently took away the Rampage special rule from the inquisitor’s profile). But perhaps the model and background were the problem? Have I unintentionally created a god? Only time will tell.

As you can see, there are limits and criteria, requirements and restrictions and dos and don’ts when writing your own rules. But do not let this put you off. I’ve just tried to outline some of the key pitfalls and considerations that should be taken into account, and have lent my own opinion to the mix.

As long as you hold the best interests of the hobby, and have the consent of your opponent, you should be able to write anything: that is the beauty of the game. Sure, it is difficult (I personally find points costs a nightmare: always over-price is my advice, as your opponent is less likely to complain at a 300 point model than they are at a 250 point model when it kills Mephiston in a challenge), but being able to field your own, unique creation alongside your existing collection makes it worth it. It is ingenuity like this that keeps Warhammer floating above the sea of lawsuits, dissent and price hikes that seem to have become the fashion of late, making it something truly special.

Now, it’s over to you: what creations have you brought to life? What ideas have you had? Let us all know in the comments. Happy hobbying!

My name is Michael, and I live in the UK. I have played Warhammer 40,000 for about 5 years, and as I am still in my teens (so sorely limited for cash and roomspace) I have only the one army (Tyranids) plus many conversions, including half a dozen Fallen and a WIP inquisitorial warband. I live in one of those areas where the majority of players are my age or younger, which has become tiring and led to me leaving my weekly club (that and the £4 entry fee). I have made a large amount of rules and background, including a World Eaters warband and a mysterious chapter of spess mahreens (no copyright infringement intended), which I will not go into due to my intense paranoia and fear of mimics (hence the lack of images).

For More information on guest writing for Faeit 212 in the "This is Our Hobby" series, please follow the link
http://natfka.blogspot.com/p/this-is-our-hobby-guest-articles.html
3/22/2013
Natfka
This is Our Hobby