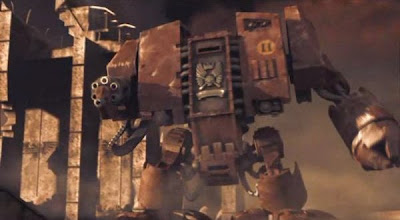 A few days back we had some interesting bits from Hastings regarding Space Marines. This is what was said, and this next bit, discusses something was apparently playtested at certain events.

I suppose I could tell you there are some new units....... but that would be a bit too vague. Hmmm, expect rhino variants, and also a new "suit" smaller than a dread but bigger than a termie. Will that do to start the rumors off?


Please remember that these are rumors. If this mornings information bit comes to light, then we are going to be hearing much more about this new unit over the next month and half.

via Bob Hunk  over on Warseer
Hmmmm, very interesting, this sounds a lot like something that I've seen play tested at certain events. Might be a coincidence but if it's the same thing then I'd expect this "suit" to essentially be a mini-Contemptor dreadnought similar to the RT-era type, designed for living Marine heroes to wear into battle and then leave afterwards. Walker, WS/BS 5, AV11, 5++ save, two power fists (with alternative weapons) and an optional jump pack.