Presence of Faeit: The End Game 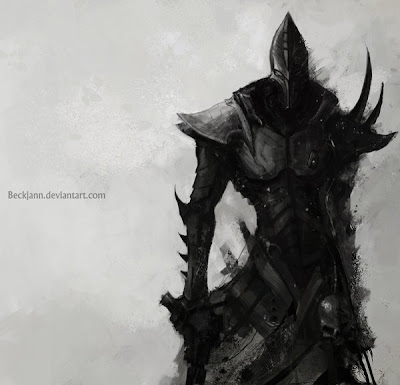 I spent most of my spare time this week painting Dark Eldar, and digging though a myriad of emails and bits of information. Some of the painting was a little tedious, and by no means am I on top of my painting schedule.


Inspiration and Beckjann
There are many things that inspire me when I am painting or modelling, and Beckjann is one of them. If you have not seen his Dark Eldar artwork over on deviantart.com, and you are a fan of Dark Eldar, then you are really missing out. The piece above is one of his that had not yet seen and thought I would draw some attention his way again. Its been a long time.
http://beckjann.deviantart.com/

Dark Eldar and their Craftworld Kin/ Valhalla
I will be taking a large number of Dark Eldar and Eldar with me to the upcoming event Valhalla. While that will hopefully be my primary force that I will be bringing, I am going to bring a small Purifier force (Grey Knights) as well. At least that is the plan, and it mostly will be determined what will fit in my new case.

I am currently 48 warriors into my lists, a bunch of Harlequinns, and am diligently working hard on my next two raiders (2 are done). These are just what I have been painting, and as I get more done, of course I will be showing some pics. Due to the holiday (Easter), most of my models have been put away until later tonight.

Still a lot of work to do, and now less than a month to complete it.

Release Schedules
There has been a ton of information regarding release schedules lately. Of course we are very much sticking to the schedule Hastings has laid out before us, but getting the actual months attached to those releases can get tricky.

With Games Workshop trying to get out a release every month, its hard to catch up and figure out if there is going to be any gaps in-between these codex releases. So far there is not, although I have heard loosely that one may be coming.

For the meantime though, Games Workshops release schedule is relentless, and I am loving it. It keeps the momentum going, keeps the hype up, and keeps the meta from ever really forming (it cant keep up).

The End Game
Following the thinking behind this rigorous release schedule, what is Games Workshop's End Game. There are 16 armies for 40k (I say that without going in and actually counting them so I know I am slightly off), and only so many releases that can come out. What is after all of this? What is in our future for 6th edition when every codex has been released?