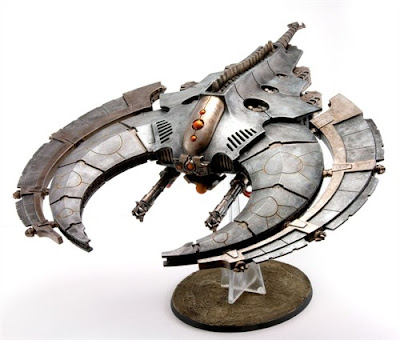 Today Forgeworld has released the Necron Night Shroud Bomber for pre-order, along with the Realm of Battle Tomb Citadel. These of course will be fully detailed out in the upcoming book Imperial Armour 12: The Fall of Orpheus. 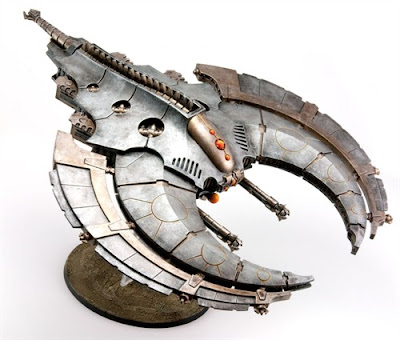 via Forgeworld Newsletter #336
Necron Night Shroud Bomber
The Night Shroud is a dedicated bomber that is larger than the more numerous Night Scythe and Doom Scythe craft, alongside which it operates, whose origins date back countless aeons to the lost battles of the War in Heaven.

The Night Shroud was built to carry a relic of that ancient and apocalyptic conflict, so-called Death Spheres, containment vessels that imprison the merest fragment of anti-matter. The Death Sphere's potent warhead is kept out of phase with the material universe until the sphere detonates, when it unleashes an energy blast capable of annihilating anything it touches.

The Necron Night Shroud Bomber, designed by Daren Parrwood, is an imposing battlefield presence. This complete resin and plastic kit is packed with detail, and its sinister, elongated profile makes for an impressive centrepiece or painting project for any Necrons collection. Full rules and background for this construct will be included in the forthcoming Imperial Armour – Volume Twelve: The Fall of Orpheus. 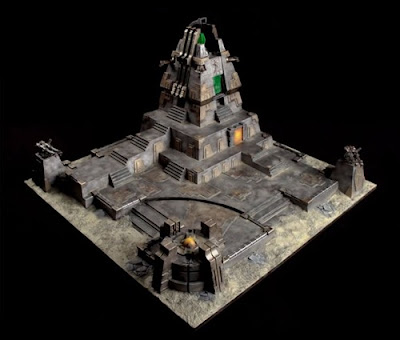 Realm of Battle Necron Tomb Citadel
The stasis-crypts of the Necrons are protected by great defensive structures; near-impregnable fortifications designed to stand against the ravages of eternity, hostile action and deadly environments. Tomb Citadels often stand on the outermost borders of a wider complex. They act as watchtowers and outposts that are often the merest tip of the iceberg; the fathomless depths of silent galleries and stasis-chambers that make up the nameless cities of the Necrons extending far below them.

A Tomb Citadel is far more than an inert relic of strange aeons past, however. Each is a near-living war machine in its own right, and Imperial combat records record these brutish structures rising from the very earth, or phasing strangely into existence in the midst of a Necron assault. If not quickly destroyed, these dread ziggurats will form a beachhead from which the undying legions pour forth to destroy their foes.

The Realm of Battle Necron Tomb Citadel, designed by Blake Spence, is a 2' x 2' (609mm x 609mm) tile which can fit onto a Citadel Realm of Battle board. Packed with detail, the stepped levels of the Tomb Citadel allow infantry and vehicles to be placed and moved upon it, and multiple tiles can be fitted together to create larger fortifications and complexes. The narrow passages between the monolithic structures and the vantage points gained from the higher levels can make for a tense and exciting game.

Full rules and background for this construct will be included in the forthcoming Imperial Armour – Volume Twelve: The Fall of Orpheus.


Both of these fantastic new releases are available to pre-order now for despatch from Friday 5th April.