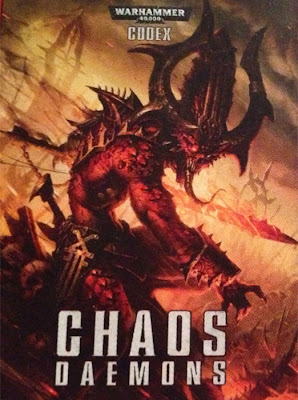 Chaos Daemons have now been out for over a week and we have not yet had an FAQ from Games Workshop. So I am expecting that we would see one very soon, and in that respect, I thought I would repost up what questions came up during our FAQ Questions post.


Perhaps some questions that still need answering will be seen before the faq is released. These are also posted at the top of the page now.

Patrick FlemmingMarch 4, 2013 at 11:51 AM
well I will be damned, it is on the flamer(pg 40) so... that's a model in a transport that is a fast skimmer firing a heavy.
the next question I have is what's the exalted flamers base size, can he disembark?

Mike Brandt; mvbrandt@gmailMarch 4, 2013 at 11:59 AM
Cannot disembark, as with the other chariot(s) in that dex. He's there for no other reason than silly fluff ... and I guess he can punch things. He could in theory be killed in cc, the chariot could survive, and a herald of tzeentch could hop on board.

This is something that will probably be tourney-FAQ'ed, GW-FAQ'ed, etc., all at the earliest possible opportunity for each.

Lore_WeaverMarch 4, 2013 at 12:02 PM
If the weapons are on the chariot, you'd be able to fire both, and would get the weapons if you had a herald on a chariot. I'm betting they meant the Exalted Flamer to be relentless. Seems to be so in the Battle Report (they move & fire it at a landraider)

HOTpandaMarch 4, 2013 at 11:49 AM
Space Wolves HQs allow for two per HQ slot so the question stands how many heralds can an allied Daemon force include?

MroczysławMarch 4, 2013 at 3:43 PM
Codex saids that only primary detachment can take 4 heralds for 1 slot.
Allies can have only 1 herald/slot.


MasterSlowPokeMarch 4, 2013 at 11:13 AM
Does an icon really not need to be on the table at the start of the turn in order to work?


haggerty321March 4, 2013 at 11:15 AM
Does Daemonic Alignment prevent ICs from joining squads in other armies with the Daemon special rule? For instance, when deployed as allies for a CSM force, can a character possessing the Daemon of Khorne special rule join a unit of Possessed Space Marines with the mark of Khorne?


kull LeaderMarch 4, 2013 at 5:34 PM
@Eternal Nurgling- you are correct, but that's not the question being asked. They want to know if a Codex Demon IC such as a herald can join a squad from Chaos Space Marines that ARE Daemon (USR) such as Possessed, Warptalons, Obliterators and have the matching alignment (mark).

Since instability states a IC without instability mayn't join a unit with but not the other way around and the alignment wording doesn't specify "daemon of X" vs "daemon with mark of X" and they are daemons it appears all requirements may be satisfied and they can.

The question is if that was intended.

So, does an IC count as a "unit" on it's own? I'd always thought so, but it does open up the possibility of, for example, a Herald of Nurgle joining a unit of Nurgle Obliterators, and conferring FnP upon them...


Patrick FlemmingMarch 4, 2013 at 11:19 AM
Issues I found
if a unit of horrors or a herald of tzeentch is created, how do you manifest the psychic power(brb only covers at start of game)


Daemons with an Icon and Daemons with no Alignment
Patrick FlemmingMarch 4, 2013 at 11:19 AM
how does an icon and a daemon of no alignment work (guessing its the same as a different alignment)


Patrick FlemmingMarch 4, 2013 at 11:19 AM
the rewards states it can't be a duplicate of what you already have in profile, yet no profile duplicates a reward name, would it be what the reward grants (like if you have a 3+ save and rolled a 3+ save, would you get a reroll)


Oliver BeinlichMarch 4, 2013 at 11:35 AM
What happens to a unit that has their initiative reduced to 0 or below by fiends? Can they still strike at Initiative 1 or do they forgo all attacks the first round of combat?

SikariusMarch 4, 2013 at 11:50 AM
If a unit given Feel No Pain from an outside source (say a Sang Priest) is hit by Warpflame and passes its T-test, does the unit a) get a 4+ FNP b) gain the FNP USR on the unit itself.
If a), then when the Priest dies, does the unit 1) lose FNP all-together 2) retain the Warpflame stacks which create and affect a new FNP stat given to the unit

Rick GroeneveldMarch 4, 2013 at 11:52 AM
Is the extra attack of Skarbrand (as he has two cc weapons) already included in his profile?
pegboardMarch 4, 2013 at 12:44 PM
Adding to that, are half his attacks fleshbane and half armourbane?


Nick WMarch 4, 2013 at 12:03 PM
Do Obliterators with Mark of Nurgle benefit from Epidemius's aura and/or add to the tally? The rule for Epidemius state Daemon of Nurgle (which includes shrouded and etc.), but the entry for daemon princes in the daemons codex refers to being a daemon of X and being a daemon with Mark of X as being equivalent.

EpicWarGamerMarch 4, 2013 at 2:42 PM
Agreed. No. Daemon of Nurgle is different from Daemon and Mark of Nurgle.

A Daemon with the Mark of Nurgle is a Daemon of Nurgle.

Otherwise you are saying that all Daemons from CHaos Daemons who in their listings Have Mark of Nurgle... Don't count.

RAW is all we have to go by, hence this list is being created to address these issues.

No demons in the book have "Mark of Nurgle", they all have "Deamon of Nurgle".

jdwelch62March 4, 2013 at 7:08 PM
Agree with MAAksel, unfortunately. Seems that the wording of "Mark of X" & "Daemon of X" is intentional, and meant to restrict the one from what benefits the other. Otherwise, IMHO, it would state that they DO affect/confer to each other.

Christopher ValentineMarch 4, 2013 at 12:59 PM
Obliterators have the USR deamon tho.

Captain Jay MorganMarch 4, 2013 at 1:06 PM
Yes, but it doesn't say "Daemons with the Mark of Nurgle". It says, "Models with the Daemon of Nurgle rule". That means no Obliterators.

Eternal NurglingMarch 4, 2013 at 6:27 PM
His tally applies to anything with the mark of nurgle. I believe the only part of that changed is the range.

jdwelch62March 4, 2013 at 7:13 PM
Disagree, Eternal Nurgling, as much as I'd like to agree, it specifically says "Daemons of Nurgle". That would seem to work for a CSM Daemon Prince, but not Obliterators, which have both the "Daemon" rule and can be given "Mark of Nurgle"... Sorry, I've been playing Epidemius as my Death Guard's ally since the CSM codex came out, and would love for it to work the way you want , but unfortunately without an FAQ to the contrary, it doesn't appear to work that way... :-(

Man Boy GeniusMarch 4, 2013 at 12:29 PM
How about just for devils advocate, does Skarbrand's effect confer rage that a screamer could use to get 3 Lamprey bite attacks?

I don't think you can because it says only one attack, but its food for thought

LeonTrollskiMarch 4, 2013 at 12:52 PM
Attack modifiers are applied in the order multipliy/divide then add/subtract then set value. The lamprey bite modifier is set value so it always goes off after rage and sets it to 1.


pegboardMarch 4, 2013 at 12:45 PM
Does an instrument let you re-roll the 6 for the effect or the scatter dice, to wound or deviation roll?

Patrick FlemmingMarch 4, 2013 at 12:59 PM
"Hit or not hit" so it wouldn't be to wound. it looks like they have it implied as the d6 on if it is suffering the effect, but the wording is loose enough to argue if it would he the scattering but maybe not the number of hits (tzeentch) seeing as it would never be "not hit", just how many hits.


xeenMarch 4, 2013 at 2:03 PM
Does warp flame stack? It seems to by the RAW that every time a unit passes the test it gets +1 so if you have a unit of ten marines, and kill one each turn over the course of the game it will have a 2+ FNP. Is that correct?


ZeredekMarch 4, 2013 at 2:43 PM
Does a Herald on a Chariot have Daemonic Instability?
Does Warpdoom affect enemies in a combat if the bearer killed a character in a challenge?
What happens if you roll a Double 1 on the Daemonic Instability tests from the The Storm Abates and Punished by the Gods Warp Storm results?


heybiffMarch 4, 2013 at 4:09 PM
Who does Karanak hate? All Khorne demons hate Slaanesh, but Karanak's profile lists HATE. No other Khorne special characters list Hate. Does this mean he Hates everyone; or more specifically the character he "Preys" on?

Captain Jay MorganMarch 4, 2013 at 6:48 PM
In the core rulebook, it says if nothing is listed, he gets hated against everything.


Ian LogsdonMarch 4, 2013 at 7:44 PM
Does a unit with the Daemon USR deep striking within 6" of an icon or banner from the Daemons book only scatter 1D6 even if it is not a "daemon of" but has a mark instead?

As written it says "If the unit(s)...have different daemonic alignments (as explained above) but are entirely composed of models with the Daemon special rule...1D6"

The explanation is:
"If the unit...have the same daemonic alignment (both units are entirely composed of models with the same Daemon of... special rule)"

Technically, a unit of mutilators is entirely composed of models with the daemon special rule, and no matter what mark they have they do not have the "daemon of..." rule, so, they would be daemons of a different alignment. Seems like janky rule writing.


SoubaMarch 5, 2013 at 12:21 AM
Another thing: if you roll the exalted gift blessed twice. After rolling the lesser and exhalted guft. Can you still exchange one and/or both gifts for a magical weapon/hellforged artifact?

Len SmithMarch 5, 2013 at 4:15 AM
Can u please clearup the jetpack cavalry rules?Do plague drones have to choose at begining of movement if to move as cavalry or jetpacks? Somewhat unclear. And as they are daemons of nurgle how does slow and purposeful affect this?


WaltermandiasMarch 5, 2013 at 12:08 PM
I don't see why this is confusing to people. It says on Pg. 47 of the Big Book that "Jet Pack is not a classification in and of itself. Instead, you'll find it occurs in addition to another - Jet Pack Infantry, for example." So they are cavalry with the added bonus of being able to move over models and terrain (with dangerous terrain tests if starting or ending in difficult terrain) and can make a thrust move in the assault phase. They have Fleet and Hammer of Wrath from being Cavalry, and Bulky, Deep Strike, and Relentless from being Jet Pack. Easy peasy.

JosephMarch 5, 2013 at 3:34 PM
do you remove the syphon tokens from the blue scribe only when you roll a six or each time you roll the die, whether there is a six result or not?


PtarixMarch 5, 2013 at 4:28 PM
For the purpose of figuring out how many warp charges a unit of pink horrors get by counting number of horrors in the unit, does a herald of Tzeentch IC that has joined the unit count as another horror?

In the rule book the heralds of Tzeentch are listed under the same entry for regular pink horrors (on p.38) so is like to think the answer is yes...

AbusePuppyMarch 6, 2013 at 2:11 PM
Heralds of Tzeentch are not Pink Horrors. The fact that they are on the same page of the fluff section is kinda irrelevant.