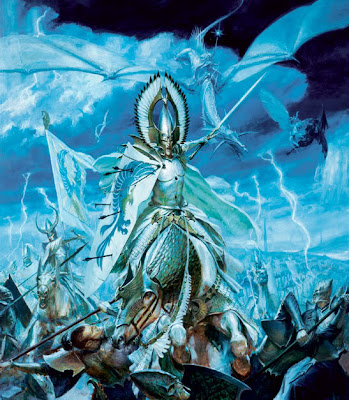 
So with that said, lets get down to what is going on in the Fantasy side of things. These rumors were collated by Kroothawk over on Dakka Dakka, so a huge thanks goes to his work at doing that for everyone. The rumors themselves all come from Warseer.


via 75hastings69
I was actually discussing with Harry about a month or so ago that next WFB is not till 2015.
An extra year would allow all armies to get treatment before new edition in 2015.

Personally I'd swap WE & Brets around and change Skaven to O&G....... but that's just me


via NatTreehouse
9th edition rumors
Major overhall and not like all the other "major" ones - radical rethink. Ricks gone so other people want to get their hands on it.
All army books gone and Ravening Hordes replacement
Timeline moves forward
So many changes won't come out before 2015, not next year (Memphis got panties in a bunch about this)


via Harry
9th will be more than a quick fix.
I posted months ago to hint as much. I first heard this last year. I have heard it a few times since.
(...)
When I said I thought 'it was 2014 but opinions vary' was because I was hearing different things from different folks.
When it comes to rumours I almost always go with what hastings says ... as he is almost always right.
So if his sources are saying 2015 ... then thats probably right.

As for the 'big changes' stuff ... you may want to hold off on the salt a bit.


via Marked_by_chaos
Every now and then I have a look at the job vacancies on the gw site out of interest. Recently the nature of adverts and types of jobs seems to have changed. There was in particular a big explosion of design studio jobs advertised at the end of last month. Seems like they are looking for everything from rules writers to background writers to army painters to video/hobby/painting presenters.

Perhaps they're starting to a get a bit more professional about design studio recruitment i.e. not a weird in house Recruitment process but an attempt to recruit the most effective staff. Some of the jobs indicate a new direction in project work, particularly the split between a rule writer and background writer role. One can only hope for no more kaldor draigos.