Sisters of Battle and Release Orders 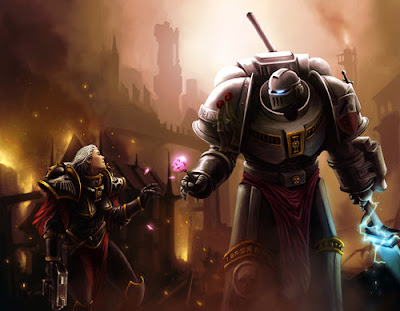 With the release order being one of the topics of choice right now, there was a lot of concern over what is going on with Sisters of Battle and on how Games Workshop is deciding what armies to update. There are still some 4th edition codices out there, and for many, these are the ones that should be updated first.


There are even a few people out there.... not rumor sources, but just a lot of worry... That the Grey Knights may have wiped out the Sisters of Battle. (hence the pic)

What will happen to the Sisters of Battle and when, are still a mystery.

via Harry on Warseer
Codex Release Order
I personally thought they were re-doing all of the current 4th edition codexes before moving onto the 5th ones
I keep on saying they are not doing that anymore.

I will be more specific. What I have been saying is that GW are not working their way through the books religiously in the same order they were done last time. What they are doing now is returning to armies they think need updating or more importantly to armies they think they have something new and exciting to bring to the table. It makes a lot of sense rather than redoing something for the sake of it but it obviously results in some armies getting left longer than others.

Sisters of Battle
I swear they started these right after Grey knights.

I have never been in a position to "spot" any sculpts, or 'see anything being worked on'. (Ever)
I heard they had started work on a dex and models for Sisters right after I heard they had started work on Grey Knights ... consequently I assumed we would be seeing the results of this project pretty soon after Grey Knights were released ... It never happened. I guess the WD dex was the result of the work being done on the book ... I have no idea what happened to the minis. There were some rumours at the time that they were not happy with them .... but it was nothing I ever heard anything about one way or the other. As far as I am concerned ... it remains a mystery.