Tau: Kroot and Vespid - Looks Like They Will Be In 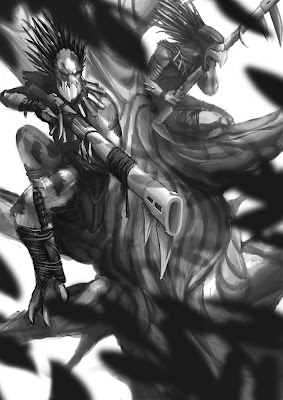 Yesterday morning we had a rumor from Ravengardt that was telling us that the new Tau codex was to be without its alien companions, the Kroot and Vespid. Well, the same source sent this to me late  in the day yesterday, saying that his source might of been a little over enthusiastic. Here is what was sent in.


This was sent in simply to help us try and find the best information, and sometimes people get it wrong. I even had phone calls regarding this rumor bit, but Ravengardt was nice enough to dig a little deeper, and then let us know what he found out.

I still believe that Kroot and Vespid will get their token unit in the Tay codex, and will then will be expanded upon if an Allies Supplement is released.

via Ravengardt from the Faeit 212 inbox
Me again, had a bit of time to talk to someone else over at $%## @ %^%^##&. The info they've got is sparse too. Looks like real release briefings were stopped to prevent leaks. They get their hard facts a day before or at preorder start. So it looks like my earlier source might have been a little overly enthusiastic. So please add a lot of salt.

Sorry if I caused trouble. I wanted to clarify how dependable me info is.


via Neko over at Warseer

There are pictures of Kroot and Vespid miniatures in the new codex, so I expect their rules will be there too