Tau Rumors: Broadsides with Skyfire and much more 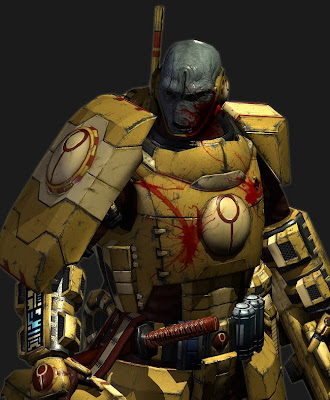 Here is a set of Tau rumors that includes quite a bit of information. Its hard to qualify the source since I have not seen him post up before on Warseer, but rumors are rumors. Take a look...... Tau are getting closer.

Please remember to take a little salt with this, These are Rumors.

via superawesomeraptorman on Warseer
Heard a couple of things through the grapevine. They COULD be complete tosh, they could be awesome insights. I'd say the usual dosage of salt.

HQ
- New firewarrior leader - can give certain squads special abilities
- Ethereal have auras - apparently they are ok, nothing to write home about
- no honor guard
- New tank commander special character - has preferred enemy imperial guard (?), use on a hammerhead apparently (best tank to use)
- no HQ alters FOC apparently

Elites
- Crisis suits no new sprue, getting repackaged into 3. This seems to contradict people hearing about a new recut - apparently commanders sprue (special issue weapons) will sneak in here?
- no stealth on stealth suits, will have something to make them harder to shoot still (maybe?)

Fast
- Pathfinders don't take devilfish anymore
- piranhas are cheaper, but not much different
- flyers go here - apparently one is anti air. Not really much news, but apparently dual kit but neither version amazing (more like a dark angels rather than necron flyer kit)

New abilities
- Single squad gets charged - every unit within 6" can overwatch into the charging squad
- Squad ability from commander (can't remember which one). If unit does not move AT ALL (no relentless, S&P tricks) every model gets extra shot. I got the impression that you can't use jet pack move with this either
- Two marker light hits = NO cover at all (not a marker light hit per -1 cover). Usual BS upgrade
- Seeker missiles can skyfire
- Multi-trackers come standard on crisis suits (or free? dunno which)

Honestly all I can remember, it might fly in the face of everything we know, and a plastic kit seems to be missing (fire warrior HQ, Flyer, Big Suit plus something?)
3/12/2013
Natfka
40k, 6th Edition, Rumors, Tau, Warhammer 40k