Presence of Faeit: Tau are Here, Tyranids and Grots 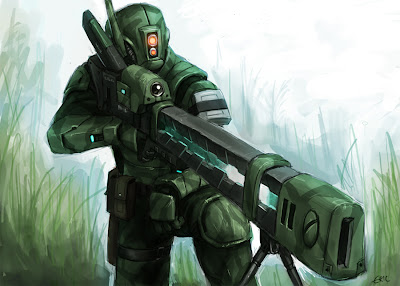 Crazy week once again on the 40k rumor front. Tau are finally going to be released, and the hype of 3 codices in 4 months is driving the euphoria to all time highs. Its not a complaint, I love it, and I think a release schedule like this keeps everyone just waiting at the edge of their seat. Its a ton of fun!

Tau Pics, and Releases........
Tau pics are flowing now, and I would imagine its just a short time until the cover art is released, along side more pics of the new models. As for the aesthetics of the new models, I am of course like always, waiting to really see the models in a Games Workshop video. I will of course say that the models are looking good, I so far even like the flyers.

Rumor wise, it looks like Ta will have good responses to air (a lot of it) with S8 AP1 weapons. This is huge in the long run, because really when you do get a hit on an aircraft, AP1 is the best means to take it down on the damage tables.

That Riptide is freakin huge. From the first glance, it looks bigger than other previous models, almost titanesque. Is this a new trend?........ I hope so.

This is going to be an amazing release this time around, and a long time coming. Tau players, expect a few disappointments (you almost always have to alter some models), and some amazing new balanced play. Tau shooting from what I have seen so far, looks amazing.....

How Different Codices Deal With Air
Now that we are on our third codex of 4th codex of 6th edition, the one thing that I have seen is that each codex has it's own variable method of dealing with air. I am starting to think that this was well thought out in advance, at least at the conceptual design of the armies and development, and I am liking it.

Yes air can be tough, and the battle for air superiority can be tough sometimes, but I find it a very dynamic and fun part of the game..... even when I have no flyers (most of the time now)......

Comparing Codices
Just a quick statement about how I look at codices........ When looking at codices as far as balance against each other, I think its important to compare 6th edition released codices to 6th edition codices (not older ones). This is important, because we are all headed that way, and they are the codices designed in the edition.

Making a comparison with older codices, it is just difficult, and while we have to deal with a combination of older codices in the currrent game, older codices are in fact old, and by the speed of releases will be updated soon.

With past releases, I have seen a ton of comparisons, myself included, of codices compared against Grey Knights, or Imperial Guard, or whatever people think the current meta is. I've had this conversation for years, about current edition comparisons, but it is even more relevant in 6th than ever before.

Tyranids..... Oh my
We keep getting a lot of tyranid rules. I am starting to get a sneaking suspicion that we may be seeing this codex in the later parts of this year. We know Eldar are after Tau, and they could be coming as early as towards the end of summer. Could Tyranids be in Q4 of this year?

Codex or Allied Supplement......
Orks/ Gretchin...... Tau/ Kroot
I know Orks mean there are Orks coming, but what really has me intrigued at the moment with Orks is their little counterparts, Gretchin. I love the idea of these little buggers on the field, as it really feeds the themed community that loves to build armies of these types. It adds a ton of variety  on the tabletop, and that to me is what it is all about.

So assuming Gretchin are getting all this love, are they going to be released in an Allied Supplement? or will it be held off for the codex.

Now looking at the newest of releases.... Tau. No Kroot have yet been seen. Is this a suggestion that something is going on for mini-allies? Are Kroot and Vespid, and Gretchin for that matter going to be either a small allied addition in the primary armies codex, or are they going to be fleshed out and added to a larger allied supplement?

I think we will find out shortly when the Tau codex is released. Even if Kroot are in the Tau codex as standard units, they could be expanded up on for secondary detachments. This to me would be such a fun addition to the game.

An allied supplement that only contains smaller army types meant for secondary detachments. That would open up a ton of options for future development. Genestealer cults come to mind immediately. A Genestealer cult Hq that is secretly leading my Imperial Guard?

Now for my design ideas, (albeit its probably a little late). Please contain a method to include parts of these auxiliary detachments into a primary force. Like taking Kroot and letting them be added into a primary detachment as troops if a secondary kroot detachment of Kroot is used. I know that is a rough idea, and I am sure GW has fleshed it out more, but I want people to have the flexibility to really dig into variable army types, and of course have a ton of fun collecting and playing new things.

In the above, what I would like to see as an example, a Kroot force........ ran by a Tau commander who is overseeing the deployment of the force. (perhaps with his own bodyguards).

Here is to hoping that Allies are expanded upon.