What is in Playtesting: Surprises 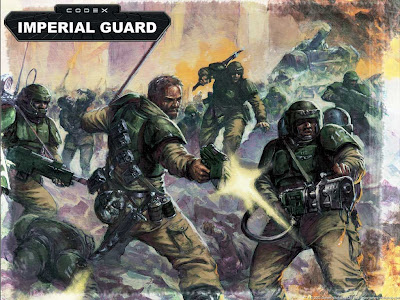 For Warhammer 40k our Hastings order of releases is soon to run out. He laid out Tau as our next release, and after that Eldar. So what is after that?..........

Well, one way to take a look at this, is to figure out what armies are being playtested right now. A source very much laid it out, and some of it was quite shocking.

The first thing that stands out when looking at this set is........ Why are Chaos Space Marines listed here. Truth be told, I have no idea, perhaps for a future supplement or expansion? Perhaps it was a mistake that it was listed?

The source itself appears sound for what he knows regarding playtesting, so I am at a loss. I have been unable to get an answer to this, or find out any additional information. Perhaps it is nothing.

Imperial Guard: Whooo hoo. I would love to see a 6th edition revision for this codex. Not only because I play this codex, but it is everyone's ally in 6th. Its release would significantly effect many different codices.

Before I go too far on what I think of this, here is the rumor bit. Please remember that rumors always require the use of some salt.

via an anonymous source