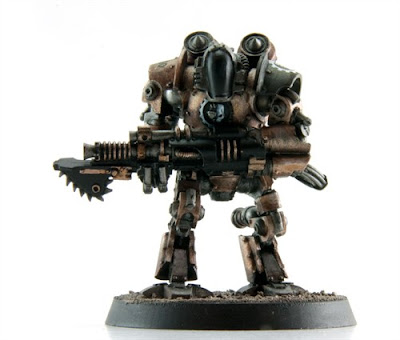 Today there was a release that caught my eye from Forgeworld. Well, normally Forgeworld releases catch my eye, but this one in particular is of interest to me, because of the Mechanicum Thallax Cohort that is now up for pre-order.
Notice that it says "exciting new development within our Horus Heresy range, being the very first Mechanicum unit to be designed," which infers that there will be more models coming...


This is from the weekly Forgeworld Newsletter #338
Hi there,
With a little over a week until the now sold out Forge World Open Day, today’s newsletter announces two new Legion squads and the eagerly anticipated Mechanicum Thallax Cohort available to pre-order now – we also aim to have all three of these kits available at the Open Day.

Mechanicum Thallax Cohort
The Thallaxii are heavily augmented cyborg shock-troops used by the Mechanicum Ordo Reductor, and they differ from the Skitarii regiments both in purpose and the unique degree of their augmetics. The Lorica Thallax, from which their name derives, was developed from power armour technology, and requires a robust human specimen to enable it to function to its maximum potential. Once integrated, it encloses its bearer’s major organs, nervous system and cerebrum, but entirely replaces their skeletal structure and limbs with armoured bionics powered by an internal reactor core.
Surgical excision of the subject’s pain sensors, emotions and normal human sensory apparatus, and the agony of the Lorica’s implantation, leaves the Thallax a cold, calculating killing machine, albeit one that retains a degree of independent thought. To some among the Mechanicum, this skirts the edge of abomination, yet the baleful Ordo Reductor continue Thallax conversion with suitable Forge Guard, fallen Skitarii, and subjects obtained from more mysterious sources.
The Ordo Reductor deploy these hulking war-robots both in their own forces and alongside the Legiones Astartes. Such long standing arrangements often result in the Thallaxii adopting the heraldry and iconography of their allies.
Designed by Will Hayes, the Mechanicum Thallax Cohort contains three multi-part resin models. These imposing and sinister models are a unique and exciting new development within our Horus Heresy range, being the very first Mechanicum unit to be designed, and their hunched profile, blank-faced helms and bulky armour are packed with detail.

Legion Reconnaissance Squad
Space Marines experienced in operating independently and behind enemy lines form dedicated Reconnaissance squads within the Legiones Astartes, acting as the eyes and ears of the main force. Equipped with a variety of specialised wargear including long-range sniper weapons, stealth gear and augmented sensor-auspex devices, the Legion Recon Squad function as scouts, gathering intelligence and mapping enemy movements and strengths.
Reconnaissance squads also serve their Legion as pickets, saboteurs, raiders and snipers where needed, striking at high value targets of opportunity. In open battle, they are expert in sudden flanking manoeuvres, and infiltration attacks in support of the main strength of the Legion.
Designed by Mark Bedford and Will Hayes, the Legion MkIV Recon Squad contains five multi-part resin models, each of which has two different weapon options: a sniper rifle or a shotgun. These models are packed with detail, from the long-range communications and targeting equipment carried by each of them to their camo demi-cloaks.

Legion MkIII Breacher Siege Squad
Combat that takes place during boarding actions amid the cold void or into a breached fortification, can prove lethal beyond even the endurance of the Legiones Astartes. For this reason, since the earliest days of the Great Crusade, specialised formations and wargear have been continually developed to better survive these ‘Zones Mortalis’.
The Legion MkIII Breacher Siege Squad is one such unit; clad in augmented power armour based on the Iron pattern and bearing great ablative shields. These squads act as a vanguard in such lethal missions, and are often additionally equipped with powerful breaching charges and lascutters or melta weapons, to destroy strongpoints and forge a path for the force’s main strength to follow.
Designed by Will Hayes, the Legion Breacher Siege Squad contains five multi-part resin models in modified MkIII ‘Iron’ armour, equipped with detailed boarding shields. The squad also includes five Phobos pattern bolters, as well as an optional lascutter, breaching charge and graviton gun.
Rules for all three of these units can be found in The Horus Heresy Book One: Betrayal. They are available to pre-order now for despatch from Friday 5th April, and we hope to have the Thallax Cohort, Recon Squad and Breacher Siege Squad on sale at the Forge World Open Day in limited numbers.
MkIV Outrider Squad Pricing Error
The Legion MkIV Outrider Squad should be £45, rather than £60 as originally advertised; apologies for any inconvenience caused by this error. If you have ordered one of these kits at the incorrect price, a refund has been processed for you covering the difference in price and any relevant shipping cost, and you will have been notified of this by e-mail.
Forge World Events NewsForge World Open Day, Salute and the Horus Heresy Weekender 2013
We are now accepting reservation orders for the Forge World Open Day, Salute, and the Horus Heresy Weekender. This is the best way to ensure we have the exact product you want, packed up and waiting for you at the event. As with all our UK shows, reservation orders are pre-paid to make the collection process quicker and easier, leaving you with more time to enjoy the rest of the event.
Please telephone the Customer Service team on 0115 900 4995 to place a reservation order. We will require your name, a contact telephone number and e-mail address, along with the list of products you wish to reserve and for which event, and you will also need your card details to hand too. We’ll process the payment while you are on the phone, and in the week before the event you’ll receive a confirmation e-mail containing your order number. This is your proof of payment and you must bring this e-mail with you to claim your order. We must receive Open Day reservations by Tuesday 2nd April, Salute reservations by Monday 15th April and Horus Heresy Weekender reservations by Monday 13th May.
Thanks,Ead BrownCustomer Service ManagerForge World