Words on Winning with Tyranids Part 2

Hey everyone, Reecius from Frontline Gaming here again with a follow up to my first Tyranid article!

Last time we left off discussing the realities of tournament play and how you must consider the effectiveness of a list over multiple rounds of play. You must take into consideration that over 5-8 rounds of play, if your army has a random effect that can be very beneficial or more importantly very detrimental, the odds of either occurring go up incrementally.

If that negative effect rears its ugly head in a later round against a skilled opponent, it could mean the game which would also mean the tournament in most cases.

Secondly, you have to be able to take on the commonly encountered powerful combinations which I will repost here for ease of reference.


Contrary to popular opinion, Nids have a lot of answers to these questions. When you see competitive lists posted on the net, they often look very similar and involve overwhelming threats. 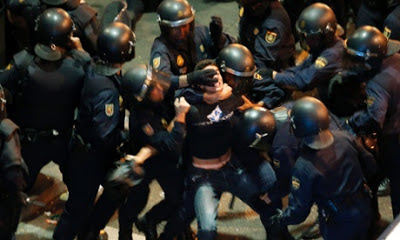 That is an extremely effective combination and you can take exactly that and expect to do quite well with it. As a matter of fact, Jy2 played essentially this exact list and took best Tyranid player at the recent Bay Area Open 2013 40K Tournament finishing 5-1-1, 9th overall out of 144 players in a very competitive field.

This is a great combination of units, and the Flyrants also allow you to not only put immense pressure almost anywhere on the table, they also allow you to directly combat Flyers effectively. Just be careful as the Flyrant is also at the mercy of other flyers who will shoot him down fairly quickly if you are caught with your pants down.

And, as most of you know, the new psychic powers give a HUGE boost to Nids. Biomancy especially can turn your big bugs into absolute juggernauts. Iron Arm, Endurance, Warp Speed are the big ones, but Enfeeble, Life Leech and even Hemorrhage can be extremely useful. The only issue with relying on these is that if you encounter strong Psyker defense, you can find your strategy undermined.

However, that is not the ONLY way to play. Nids have so many unit interactions that it really is a very exciting army to play! You just have a dig a bit below the surface to see all of the synergistic elements and not allow yourself to be blinded by "Net-Think."

Alan B, aka, Pajama Pants (winner of the ETC singles and WargamesCon), plays a hyper aggressive Nid list with dual Flyrants, Zoeys in a sPod, Ymgarls, the Doom in a sPod, dual Tervies, Gargoyles and dual Mawlocs. That is a list that puts immense pressure on the opponent, with fast units coming in hot, and powerful units coming in reliably form reserves with a 2+ (Hive Commander upgrade) Most armies simply cannot deal with that kind of pressure. He won best overall (IRRC) at TSFHT in Seattle, a competitive format event. 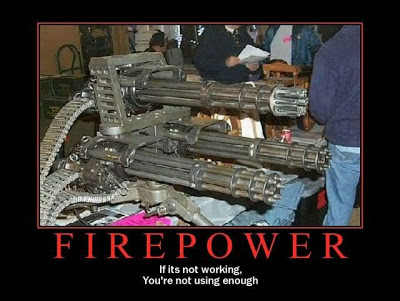 Another list I have been toying with that is a lot of fun to play, and certainly a very different play style is the following:

What this gives you is a phalanx style army that walks forward and puts out an impressive amount of firepower. It depends on the Preferred Enemy bubble of the Tyrants to really ratchet up the damage output of the other units. Now that Preferred Enemy works on shooting too, you get a significant increase in offense. For example, a unit of 20 Devil Gants goes from an average of 15 wounds against a T4 target, to 20 wounds, a 33% increase. Nice one! Things like the Dakkafexes, Dakka Tyrants and Hive Guard become ultra reliable, too. It means they will wound 35/36 times per hit against T4 or lower targets, and Hive Guard become super accurate due to rerolling half of their misses. It means a unit of 3 of them averages 5 wounds against most targets whereas typically they average 3-4. It also means an average of 5 hits against vehicles where as normally they are 4. Against flyers, it also means you will average about 2 hits as opposed to 1 with every 6 shots. That really is a big boost, especially considering they ignore a Flyers Jink.

The Venomthrope really helps to increase durability with essentially defensive grenades granted to friendly units, and a 5+ cover save which helps a ton against deadly Barrage weapons. The issue though is giving up one of those vital elites slots for that added defense! It really comes down to if you think you will be facing a lot of weapons that necessitate the cover save, or if you play in an area with a dearth of terrain (which is a fairly common problem at tournaments).

Lastly, the Tyrants and Fexes themselves are really deadly in combat, too. Preferred Enemy gives quite the boost here, as well!

This army struggles a bit with speed, though, and fast, high damage output units like Venoms can be murder on your army until you get close enough to shred them with massed firepower. JotWW is brutal, too.

Gargolyes can help a ton with this type of list to give you fast tie-up units and board control to counter Flyers. This army is also quite good against Flyers due to the volume of high strength of shots and twin linked weapons. 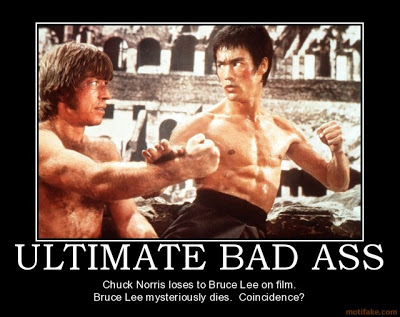 I have also been experimenting a lot with the Swarmlord. I love Mr. Swarmy T. McAssKicker! Probably one of my favorite characters in the game. What does Swarmy bring to the table? Almost unbeatable close combat power. If he gets Iron Arm and either Endurance or Warp Speed he becomes the last word in assault. Without that, he is still great, but with them he will walk through almost anything baring massed poison, rending or AT attacks. The threat he poses is his greatest asset. A smart player will not come within 18" of him because of his potential damage output which gives you massive board control. A poor player will come into that bubble, and get absolutely munched as a result. Swarmy wins me the game frequently without ever actually getting into combat.

I know that sounds odd, that a 280 point model will win the game without ever killing another model, but it is true. By moving to the middle of the board Swarmy creates a no fly zone that forces your opponent into very narrow lanes of movement. He also protects any units nearby from assault such as your vulnerable Tervigons.

Swarmy is also a force multiplier with his Hive Commander (+1 to reserves) and the ability to hand out Preferred Enemy or Furious Assault to any one unit within 18." Also, his 18" Synapse bubble has saved my bacon more times than I can count.

On the downside though, Swarmy is slow, and if he doesn't go Super Sayan with Iron Arm he is quite vulnerable to massed firepower. That means he could become a liability in a crucial game.

The list I've been using lately with Swarmy is:

From there I typically take a Trygon for more hitting power or a second Tyrant.

Another, alternate play style that I am in the process of testing now is the horde. I think that this is going to be extremely viable for a number of reasons. First, here is the concept. 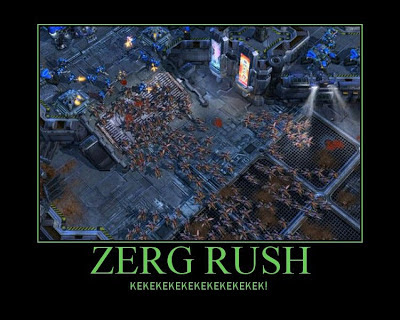 This gives you a few key advantages. For one, you have HUGE board control. Gargoyles take up a lot of real estate and give you a great way to counter Flyers. By denying Flyers a place to land, you can actually destroy them, and greatly influence where they can be placed and subsequently what they can shoot. Combine this with spawned Gants, and in two turns you can conceivably cover the board and auto-kill flyers. 2-3 Tervies also dramatically decreases the odds of crapping out on spawned Gants on the first turn.

30 Gargoyles also weighs in at the same points cost as a Tyrant (little cheaper than most builds) and you get 30 wounds, 60 attacks on the charge, Poison, Furious Assault, shooting and speed. These are seriously awesome units! They will waste any MC, most infantry units and will take down most vehicles on the charge with massed str4 attacks on rear armor.

The Prime is a great buy for his points, and can join a unit, which is really useful. Just watch out for strength 10 barrage weapons! He can also be joined to Hive Guard to benefit form their tough 6, or join Venomthropes to extend their ability radius and boost the majority toughness to 5 if he joins a single Venomthrope. He can also be joined to a brood of Dakkafexes to either benefit form their high toughness or to help spread wounds around with LoS! by either keeping two in base with him to play the odds (random wound distribution) or by shuffling wounded Carnfiexes around.

This army also gives you a lot of resilience against the arch nemesis of Bugs: Dark Eldar. Thourgh sheer biomass, you can endure the storm of Poisoned shots and engage the Dark Eldar in combat where you can destroy them.

The other benefit this style army has is that it is very reliable. You aren't counting on getting psychic powers off which the other builds are really reliant on. At a big tournament you can pretty much guarantee on seeing a lot of Rune Priests and Runes of Warding which can really gum up Tyranid strategies.

A viable alternate strategy here is to take the Parasite as your HQ for some mobile synapse. Tervigons with Dominion are quite good, but in a bloody combat you can quickly find yourself out of Synapse with casualty removal.

The downside is no unit that really hits hard in HtH like a Tyrant does. With Crushing Claws the Tervies can somewhat fill that gap, but they really aren't going to go toe-to-toe with Draigo or Bloodthirster. Even with Iron Arm, they simply lack that critical punch. 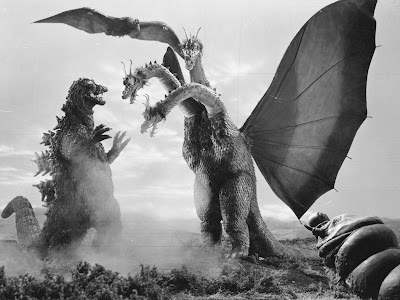 Nidzilla is still viable as well, although I honestly feel it is a weaker build at the moment. It has a ton of raw offense, but the big bugs aren't as durable for the points as the hordes of smaller bugs.

However, the following would not only be scary but a lot of fun to play!

Fairly straight forward, but good fun. Poison ruins you, JotWW and ID wepaons ruin you, too (Grey Knights particularly) but in general, a fun and visually appealing army.

I get asked about the Harpy all the time, but honestly, that unit is just not good in my experience. We have play tested it quite a bit, but it under-performs in every test. Average rolls sees a Quad Gun killing it in a single shot frequently, and with strength/tough 5, a primary weapon that can't hit other flyers,and sub-optimal armor, he really isn't that hot. I could see perhaps in a large points limit game where you have a mass of threats and he can rely on safety in numbers, but in general, I would say invest your points elsewhere.

We'll call it here to keep it succinct, but the list goes on. Every time I talk to another Nid player I get more great ideas! I have no doubt that there are a great many more iterations of lists that can be pulled out of the book that will play well on the table top in a competitive setting, and would be happy to hear some of them in the comments section.
3/13/2013
Unknown
40k, 6th Edition, How we play the game., Tyranids, Warhammer 40k