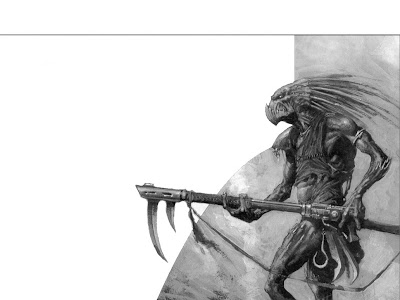 Kroot, Vespid..... Will they be in the Tau codex? Everyone has been rather silent about it until now. Here finally is a rumor that cuts right into the subject, the Answer...... No Aliens. However, this bit declares there will be an Allied Supplement with the aliens that are missing in the Tau codex, Kroot and Vespid, and even another race.........


Please remember that these are rumors, and that some salt is always required.

via Ravengardt from the Faeit 212 inbox
- Aliens are out. No Kroot, no nothing.
- There will be some kind of supplement with alien allies. With Kroot,
Vespids and a race described in "The Greater Good" novel. I don't know
when, I don't know if it's a codex or WD thing or anything.
- Broadside Railguns can choose each round if: Str 8 Ap1/ Str 6 AP3 blast
- Tank/ Riptide Railguns have Str 10 AP1, I don't know about the fire
modes.
- Tank commander gives skyfire to the tanks