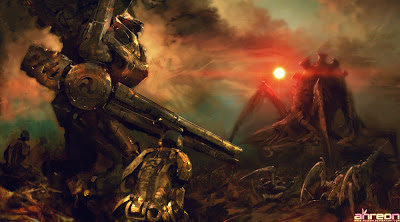 Late last night, the Dude over on Warseer had some information regarding the Riptide and its Nova Reactor. There was a lot of talk about whether or not the Riptide gets a save, weapon loadouts, and if really the results of overloading the Nova Reactor are random or not. This bit is everything I could dig up on it, as well as input from one of our good sources that sends in info to help us check rumors sometimes.

via neko over at Warseer
I didn't get any impression of the Nova reactor giving random effects (other than the chance to kill yourself of course). As always though, I could be wrong.


via an Anonymous Source from the Faeit 212 inbox (pretty good source)
*Heavy Burst Cannon or Ion Cannon + Shield for Weapon choices (No Rail weapon)
*Nova reactor is a 3+, you pick the effect, it's not random.
*No saves against the wound.


Last Nights information encase you missed it...
http://natfka.blogspot.com/2013/03/tau-riptides-activation-of-nova-engine.html
via the Dude onWarseer

Just heard the following:
Activating the Riptide's Nova Engine is risky. It only works on a 3+. If it fails to activate (roll of 1-2) the Riptide suffers a wound.


Of course I'm not sure the mechanics of the Nova Engine, but it appears to me to be a simple random table with1-2 being take a wound and 3-4 being one of the four rumoured buffs. If this is the case, you wouldn't be able to rely on it happening.


If it works the way I'm thinking the table would look like this:

3: Support weapons may fire twice
4: Invulnerable save becomes 3++
5: Stats Boost (I'm going to guess this will be multiple stats rather than a choice)
6: +1 S & -1 AP to one weapon