Home » High Elves » Rumors » Warhammer Fantasy » High Elves: Are they Next? (and a small Eldar bit)

High Elves: Are they Next? (and a small Eldar bit) 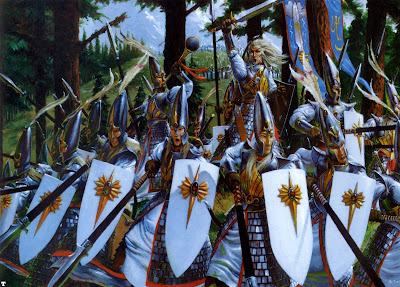 So now that we know Tau are officially next, we can look back to the release orders we have seen for some time now, and wonder... Are High Elves next? Also there is a little Eldar bit towards the end.......


From the sounds of things, yes, and I have even heard that people are saying there is a hint to it in the new White Dwarf, although I have not yet verified it. So check out the High Elf rumors for Warhammer Fantasy.


This was put together by Kroothawk over on Dakka Dakka, so the huge thanks from the community to him for collating all this information.

Ozguard Battlehammer over at Bugman's Forum wrote:
I won't say how I know but I can say that the next army book will be High Elves.

They have a number of new things.

Flying Phoenix's (Frost and Fire) that can drop flame templates on units they fly over. Gets abilities based on what is roled on winds of magic

Great Eagle towing chariots (Which can have bolt throwers on them)

Martial Prowess across the board

Swordsmasters get a parry save vs shooting

The White Dwarf battle report is vs Ogres.

I'm not sure how many of you are interested in High Elves, but I thought I'd share what I know.

More rumours on High Elves, collected from Spanish forums by Nopuiiidorl over at Warseer:
Hi there.

Indeed, in spanish forums people are discussing a huge pack of rumors since a couple of weeks ago. Belannaer may return. There will be new model to Imrik in a huge dragon (Caledor Dragon?), according to rumors.

Hastings' flying chariot do exist, but may not be pulled by eagles.

There will be a shrine/anvil (similar tu lumynarch/hurricanum) of two known elven gods. Some buffs could be magical attacks/flaming attacks/ASF.

Dragon MC will be modelled taking Thaindon's dragon as inspiration (that elf dragon rider from the 3rd edition). Like current HE plastic dragon (which takes inspiration from a very old GW dragon).

Do not expect to see spears/LSG core units in may. The rumor holds truth, but that belongs to a further miniature wave. "Silver boys" coming later on too.

ASF will be lost as rule armywide (Harry said that alredy). This would mean a slight point decrease on miniatures.

A less likely rumor talks that there will be a "Caledor dragon", apart from current dragons.

SMs may have a path-choice attacks (+1 to hit/KB/ward save...), lions being slightly more focused in monster-killing; lion pelt would protect also in CC.

Apparently there will be new miniatures for Teclis and another "plastic mage (Belannaer we hope)".

Plus: intrigues at court coming back (maybe different from 6ed), no valor of ages (probably changed into a new rule). There will be a new racial rule shared by all elves (we are discussing if this could be something related to elven swiftness).

Cruddace was not the HE designer, and a team would be working in all three elven races at once.

Remember, all this are just rumors. Source wants to be anonyme.

75hastings69 wrote:
I did report another plastic Mage some time ago so ill happily confirm that

Best_Pone over at Warseer wrote:
I can confirm the flying chariot. It looks like a tiny boat with wings, and is pulled by a single giant eagle. It looks kind of silly in my opinion, but not much that can be done about that.

As for the phoenix, it can be made up either as a fire phoenix or an ice phoenix. This one at least look pretty cool (or hot, depending on the option you choose I guess )

Best_Pone over at Warseer wrote:
Both of these will be plastic kits:
- A unit of lasses that look to be using bows formed from water. They're something to do with Avalon?
- A unit wielding bows and swords, with face-covering helms. I understand these to be called Shadow Soldiers or something to that effect.

Stromez Grom wrote:
I can confirm that I`ve heard those rumours before... The first time, I thought my source was kidding me... but now... It could be possible.
I can confirm that we may get a new plastic infantry kit (10). I was doubting between Baumgant rumour (SM,A,SG), and new shadow warriors/maiden guard.
Also there`s a phoenix on the way but not a superphoenix. It's a part of a shrine. I can confirm there is a huge dragon on the way but maybe not yet.

From an anonymous email to Darnok over at Warseer:
Every 3-4 months, as an independent retailer, we get a list of items that must be stocked. These are changed in advanced so we don't order old stock, and to give us a change to sell off old stock before new items turn up. The last one in about October / November added a few basic Marine items but dropped Tau Battlesuits, which would tie in with concepts of new battlesuits and new Tau for Spring / Easter.

Yesterday I got the new list, which had a lot of changes in the Fantasy sections. I no longer have to stock High Elves Spearmen, Wood Elves, Bret Knights or Dwarf Warriors. It can therefore be reasonably speculated that these core troop choices will be relaunched in the next 6 - 8 months. The only change in 40k was I no longer have to stock any Eldar (not even DA or Guardians).

I know its not radical or ground breaking and gives no specific dates, but the Bret / Wood /Dwarf news I think is a bit new.
3/29/2013
Natfka
High Elves, Rumors, Warhammer Fantasy