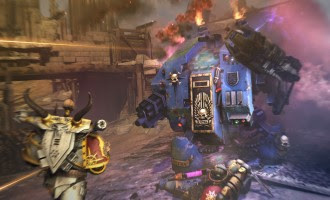 Yesterday we were discussing a few things that Hastings had said over on Warseer, and to our surprise here on Faeit 212, Hastings paid us a little visit and joined in on the conversation. Of course he left some very nice rumors as well.


I want to say thank you to Hastings for stopping by and leaving us with some rumors. They are greatly appreciated by the community. Feel free to stop on by again.

Below are the rumor bits he left us with in the comment sections yesterday, and of course the link.
http://natfka.blogspot.com/2013/03/40k-release-order-space-marines.html

via 75hastings69 from the Faeit 212 comment sections
Space Marines
75hastings69March 22, 2013 at 1:52 PM
I suppose I could tell you there are some new units....... but that would be a bit too vague. Hmmm, expect rhino variants, and also a new "suit" smaller than a dread but bigger than a termie. Will that do to start the rumours off?