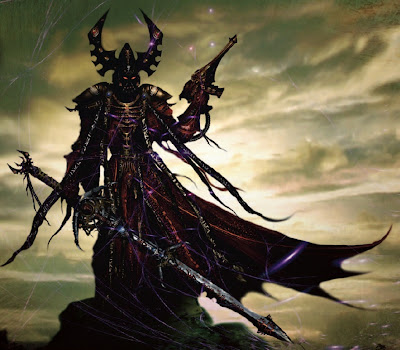 Boxes of Eldar were seen sitting in a Warehouse. This is what was seen..........

These rumors are from July of 2012. Of course they have become more relevant with the Eldar rumors of late, because there has been talk of an Uber Wraithlord and two eldar flyers that will be released with the Eldar sometime after Tau (presumably after a few months of a break).


These are rumors, please take them as that. salt is required. Please remember that these rumors came from last year. Thanks to all the comments linking the old rumor bits back for us to check out again. (Sentaph)

These rumors are currently sitting on the 3++ forums. Here is the link to the page that this rumor is coming from.
http://projectbiomorph.com/index.php?topic=181.0

Eldar Warpspiders/Everguard
5 per box plastic
Spiders: whole squad looks like the old exarch, no huge weapon, helmets smaller, but same shape, wrist blades, two small spinner weapons on rod mount from the back. Spider web like straps on the chest that hold the backpack (doesn’t look as broad as the old version), running, jumping and slightly cowering poses, exarch has extra pair of weapons on the cover, don’t remember the back pictures

Everguard: aspect warrior body with runes on the chest, same collar as warpspiders but no mandible arcs and gas masks, different more warlock-like face plate and small arc at back of the head, double bladed two-handed spears, very dynamic models, jets from the side/underside of the backpack, squad leader has larger head-arc, mantle hangs over the backpack, flies in the wind

Eldar Sky Charriots/Shining Spears
3 per box, plastic
look like small vypers, slightly larger than jetbikes. Two parts: an engine part with jetbike-like canopy but in the shape of a dragon, owl and hawk head, sideway jets, and a distinct winged chariot part, parts are connected by arcs.

Riders either warlocks but arms are not robed, spear, sword and staff; or shining spear aspect warriors with lances, shining spears have smooth canopies with gems instead animal heads, helms look very cylon-like, have collar-like shoulderguards

Eldar Jetbikes
3 per box, plastic
the same pose as dark eldar jetbike, guardian riders with smaller helmets or bareheaded with lots of flying hair (80s heavy metal mane) and without backpack, vyper-esque smooth canopy, jet and wings have the same design as a falcon grav tank, underslung twin shuriken catapults and/or serpent-shaped bladehooks, some riders have axes with a hole in the blade

Eldar Dragon Riders
3 per box, resin
very slender lizard mounts not unlike slaanesh steeds, all female rider, no helmets, long braids, guardian armor without backpack, all have shining spear lances, sabres and/or sniper rifles as sidearms, the armor has no decoration, not even gems or small bubbles, only exception is a gem that holds a cloak that falls to the left side of the rider, very simplistic look, not aztec or tribal at all

Eldar Wraithguard/Cataphracts
3 per box, plastic
look like old versions but have two rods for upper arms and thighs instead of just one, some have feet, some hooves, large fins at the back

Eldar Swooping Hawks
5 per box,
larger wings, not so stiff and two-dimensional, several straps of clothes from the loin, wrists and ankles, model stand on these straps, both shoulder plates have inbuilt missile racks, Exarch has two shoulder-mounted blasters and a scimitar in one hand and two optional rifles, one is the same as the old exarch had, the other is a small star cannon

The Avatar of the Young King
resin
Completely new design, much smaller, only as large as a wraithguard, set of aspect armour where every piece is spread out and connected by a body of magma, looks like an fire/earth elemental clad in a suit of armour, dire avenger helm with fire from the eyes and half burnt helm crest, floats and torso pose looks like vader during his Noooo scream, hands are armored, blood is dripping from the left, the right is molten and transformed into a blade

Eldar Spirit Warrior
wraithlord-war walker mix, trygon base, running bird legs with hooves, huge scaled torso, a dozen poles extend from the back (like wraithlord but three times as much), left forearm replaced with massive lance, right hand holds extra handle on lance shaft or a three pronged swastika blade. Lower back, left shoulder and part of the left arm are concealed by an impressive cloak, head is surrounded by scaled armour plating, large gem at the front, doesn’t bend upward towards the end but downward, whole model leans forward, chest can be opened, female pilot inside

Eldar Phoenix Lord Nuadhu, The Fireheart
Plastic,For Shining Spears, appears to be on a Vyper jetbike.
nuadhua holds lance upright, one end on the ground, points with axe on something, shining spear helm with tail of hair, layered armour like dark eldar-armour but with smooth curves, can be placed on vyper-variant, looks very similar to a vyper, canopy more segmented and wings in falcon-style, one large jet engine, chariot platform on the back, two large pennants

Eldar Dire Avenger Xentarch
resin
holds two handed samurai sword downwards, two wrist-mounted shuriken catapults, banner, 99% that the phoenix on it is modeled on, one foot stands on a rock with an owl next to it, all armour plates are bedecked with a rune pattern, don’t know if this is only painted on

Eldar Howling Banshee Xentarch
resin
golfer pose, bends forwards and slashs upwards with a sabre, stretches other arm straight into the air, holds tri-swatiska, has snakes woven into her hair

Eldar Striking Scorpion Xentarch
resin
jumps forwards, holds two short but thick chainswords in front, back of armour has backbone-like element that looks like a scorpion tail, continued on the helmet and ends in a sting, stands on ornamented plate with roots on it

Eldar Fire Dragon Xentarch
resin
knees almost, holds very long pike with two hands ready to fire, huge cluster of grenades on his back and his belt, helm ends in a dragon head

Eldar Lamia Strike Fighter / Moon Siren Bomber
plastic combi- kit
The flyer is pretty large and has a crossbow shape, two canopies, one fin. The main variant on the cover has some lances and a large dorsal distort cannon. The other variant has extra downward/sideway thrusters, but I don’t remember if it has a different weapon loadout.

Eldar Black Warden
resin
The Black Warden looks like an female Autarch. She has a shurikencatapult and a feathered guardian helm with an eye on it.


Eldritch Raiders
resin
They look like guardians but have no helms and wear scarfs around the lower head and swashbuckle belts. They are very individually equipped, have all sorts blades, pistols and/or rifles. (potentially Storm Guardians?)