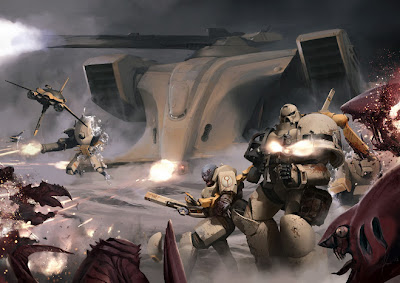 With April's White Dwarf only hours away now (tomorrow release), and many people receiving an early copy, the information has been rolling in quick. Here is what I was able to dig up this morning.


Please remember that these are still interpretations of what people are reading in the latest White Dwarf. There is still room for a margin of error.

via an Anonymous source from the Faeit 212 inbox
today I got informed that the € price for the three Krisis Battlesuits is wrong, it's a typing error. The price will be 50,00€ - not 60,00€. I think it's good news for europe ;-)

via revenant J J  on Warseer
the cover artist is Raymond Swanland.

via librerian_samae  on Warseer
a few bits:
-seeker missiles SEEM to be a hard point option for suits
-nova reactor has some kind of 'gets hot' rule, from the way it's described in the battle rep it seems to be an auto wound (and choose what bonus yoiu get) as the riptide looses a wound every time he uses the ability (and fails whatever role he has to make, lol!)
-supporting over watch is army wide
-'cold plasma rifle' is an artefact of the French translation.
-sub munitions is an upgrade for hammer heads
- disruption pod is a 6+ (invulnerable???) save


via Sildani on Warseer
It's worth mentioning that Farsight Enclave shoulder pads will be available to order separately.

Darkstrider's actual name seems to be Mayamoto. He makes the squad of FWs or Pathfinders he joins treat their target unit as having -1T.

Ah, and the Battle Report is Tau versus Tyranids (Round 2! Fight!) with Deathwatch. The above from ATT.

via Dominic's comments on BoLS

--Disagree on his assertion about Crisis team size. Yeah, the image on the page describing the Commander has four suits (one white-helmet, presumably Shas'vre), but the player in the battrep only takes three: two 'ui and one 'vre, as we're used to. Additionally, every other shot of a Crisis team in the mag is 3 suits.

And it's not unknown for the photographers to get stuff wrong, either. Note the "action shot" of Darkstrider (...srsly, Vetock? El'myamoto? You couldn't come up with /anything/ better?); says he's leading a Pathfinder team, where in fact there's about as many Fire Warriors as there are Pathfinders in the picture.

--It looks like the Riptide's arm mounts are reversible, as the suit in the battrep has the main gun and shield switched (gun in left hand).

--Pathfinders appear to have lost a point of armor...

--...Maybe they left it back at base, with the Devilfish. In the battrep, two Pathfinder teams... no Devilfish in sight!

--Might be another case of getting it wrong (it's a personal army, not a studio army), but the Hammerhead in the battrep has both SMS and a chin-mount burst cannon.

--Broadsides still get TL plasma or SMS as secondary weapons, in addition to a single Seeker on a shoulder mount if they want it.

--The Broadside's alternate primary, the High Yield Missile Pod, appears to be an amped-up MP rather than an SMS variant.

--The Recon Drone (the big one in the Pathfinder kit) sits in the turret cupola of a devilfish, and serves some kind of C&C and fire support role... and carries a burst cannon!

--It looks like the Commander comes with more than one set of hands (or his hands are poseable), as they're shown both open-handed and fists-clenched.

--The Dawn Blade is described as being a power glaive.

--Shadowsun's shield drones are not the standard type. Hers are called out specifically as MV52 Shield Drones.

--She also appears to be able to join units now, as in the battrep she is deployed in the middle of the stealth unit and later the 'nid player refers to the XV-15s as "her Stealth team" as a Zoathrope brood and Tyrant open up on them, finishing off the team and wounding her.

--Markerlights appear to be able to completely negate a cover save with a single hit. Other uses sound like they're the same.

--Submunition rounds are apparently an upgrade for the Hammerhead.

--Repulsor Impact Field: carried by one of the Shas'vre bodyguards. D6 S4 AP- hits to an attacker at initiative 10! It gacks a Genestealer at one point.

--Sun Sharks/Razorsharks are quite small. Article describes the main fuselage as Piranha-sized with Devilfish proportions.

--All of the weapons, support systems, and heads from the Crisis, Enforcer, Broadside and Riptide kits (except the Riptide and Broadside main guns) are interchangeable with one another.
Source: http://advancedtautactica.com/viewto...st=0&sk=t&sd=a


via ( ) Sorry I lost track of where I got this last bit.
The new experimental weapon for pathfinders is a Ion Rifle. I don't know if the names of the new drones are out, but here goes:
Grav-Inhibitor drone, Pulse Accelerator -, and a recon drone. The others aren't mentioned, but a total of 6 different can be made from the Patfinder kit.