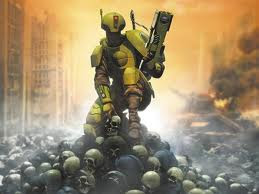 Ever concerned that Tau were not going to be released for April....... The Cat is out of the Bag!!!!!. Tau are here, and yes the pics out next month's White Dwarf are spreading faster than a wildfire.

These pics can be found over at Advanced Tau Tactica (Where they first appeared) and on Warseer by sinowarrior, or L'Astropate.