New Ork Units and HQs Will be Coming 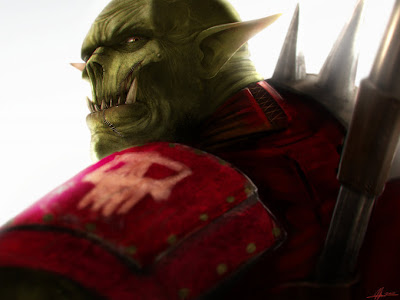 there were a few Ork rumors circulating yesterday over on Bols showing us some new units that will be coming. Its been awhile since we heard anything about Orks, so I am not exactly where in the process they are at right now. Playtesting though, could be done, or at the very least should be very close to being done.


Please remember that these are rumors, salt is alway required.

via Larry Vela on Bols
NEW HQs
"Grot Boss" Grot with a stateline of a Ork Boy, but higher BS. Equipped with a nice kustom-mega-shoota as an option. Can also get a Buggy or take a Killa-kan as a transport/upgrade

"Da Crew"  An HQ unit of even bigger Nobs. They have odd LoS modifications, One Nob must be nominated as "Da Boss", and if Da Boss is killed, one of Da Crew is promoted.  This interacts in some new way with "Kill the Warlord" victory conditions, and is effectively an entire "warlord unit".

NEW UNITS
Grot Whirlybird:  Rotored transport: Capacity 20 Grots. They get dumped on the battlefield roughly from the Whirlybird taking a mandatory DT test, and cause mayhem if they fall atop another unit.

Grots Buggys: Similar to Nob Bikers, but are buggies with Grots on the back and Orks behind the wheel! Drive-by attacks. Highly likely this will be an "alternate unit" for a buggy combo-unit box.
3/13/2013
Natfka
40k, 6th Edition, Orks, Rumors, Warhammer 40k