Trial Watch: A New Week Begins for GW vs Chapterhouse 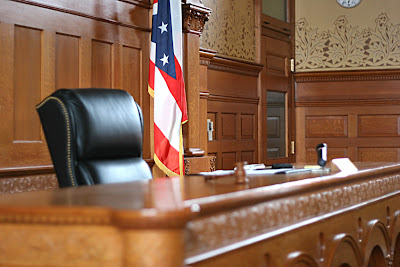 The trial for Games Workshop vs Chapterhouse is under way, and its a new week starting today. In fact its underway as we speak right now. If you missed this, or are just getting started, here is your chance to get going on it.

Of course the outcomes of this trial will be greatly scrutinized, and I personally think it will open the doors to new business's to jump into the market when this case is decided.

Here is all the information from last week, courtesy of Larry Vela over on Bols who is watching this very closely. Note that this trial is supposed to end tomorrow or Wednesday at the latest. So this is something we will keep an eye on.

The trial day typically will extend from 9:45 a.m. to 12:30 p.m. and from 1:30 or 1:45 p.m. to 5:00 p.m., with morning and afternoon breaks. The Court notes that this is longer than its typical trial day. The Court reserves the right to extend any given trial day to 5:30 if warranted in order to complete the trial within the dates set aside.

Trial Summary
Jury selection is completed, and the trial is underway. Both sides have completed Opening Statements, and the first witness is on the stand:

Alan Merrett - Head of Games Workshop IP
Mr. Merrett's testimony was hours in length, initially focused on explaining Games Workshop's business to the jury. Some highlights from his testimony:

-A Realm of Battle board was pulled out to show the jury to help explain what wargaming is.

-Games Workshop was described as being producers of "Toy Soldiers" and their game systems as being "infinitely customizable".

-It was explained that Games workshop uses no traditional advertising outside of word of mouth and social media based online communications. Customers could simply google for their products and find thriving communities of eager fans on websites such as "Dakka Dakka and Bell of Lost Souls".

-Warhammer 40,000 was described to the jury as "Warhammer Fantasy in space", along with describing the Eldar as "Space Elfs", along with other "space" factions such as "Space Orcs".

-The Dark Eldar were described as "spikey, evil, and every other evil cliche".

-The Tau were described as "modern sci-fi; more traditional sci-fi" in appearance, as opposed to the archaic aesthetic of the other ranges.

- GW takes pride in the "quality and originality" of their products. They do not like when any other company makes miniatures that are based on their own product line, viewing many of these to be of inferior quality. Me mentioned the aftermarket for add-ons "makes us jolly-cross indeed"

-GW latest annual numbers reflect revenue of $54 million USD in North american sales. 50% of that was 40K, the other 50% all other GW products sales combined.

-GW was described as having licensing agreements with "big companies", and there is a perception that any such "big companies" would be upset by percieved theft of GW IP. He introduced no evidence of licensees becoming upset having actually occurred.

-GW is concerned that the poor quality of CHS products will rub off or bring down the percieved quality of the GW line in the eyes of licensees. He introduced no evidence of this having actually occurred.

-GW feels that they should get to decide when a product they invent in print and illustration gets to come to market in the form of a physical miniature. When a company such as CHS introduces a competing miniature that was previously unreleased into the market ahead of GW, they consider this this "poisoning the well". Other companies such Kromlech, Maxmini, Scibor, Hitech were listed by name as being examples this concept.

-GW considers the following naming schemes to be acceptable for the aftermarket, applying to all products that interact with their own 40K products:
PRODUCT NAME: "compatible with 28mm science fiction miniatures"
PRODUCT DESCRIPTION: "compatable with Games Workshop [insert exact GW kit title]"

-Said that "anytime CHS made money, that was money GW should have made"

-GW Legal has an "IP Protection Group" which investigates allegations of IP infringement and decides whether/how to proceed. They are usually first alerted to alleged IP infringement by GW customers who they consider to be "our first line of defense as it were".

-GW has 200+ casefiles on organizations and individuals it is investigating for potential legal action against.

-CHS disclosed that its total gross revenue before expenses for a roughly 4 year period in question was @$400,000
-Valluci took home $3000 a month from CHS, while his overseas partner took home $2000 per month.