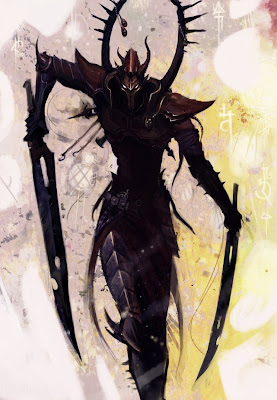 This week seemed very busy on the site with lots of new rumors, Apocalypse information, and more. However on my own front, it was business as usual, getting down to how to integrate my Eldar into a Dark Eldar force. Solutions have found.


I love the above pic. Its just fantastic and flows into some of the lists I have been working on.

Dark Eldar with Eldar Allies
I have been trying to find the perfect combination of ways to add eldar into a dark eldar list. I think I have narrowed it down quite a bit, on exactly how that will work for me. (after many trials and tribulations).

First off, I love raiders, so my list will have to include them in a significant number. Second, I love splinter cannons. So a list of mine would have to include a lot of both of these. With that being said, what can I do that will add to my list to strengthen it.

Wraightguard. I thought they would be a perfect fit from the get go, but exactly how to field them has been tested out several times now. I have tried the Wraightblades, tried Wraithcannons, and have settled on the devastatingly dangerous D-Scythe.

The D-Scythe Wraithguard in a Waveserpent is dangerous, when they go off, they can rip apart almost anything they get ahold of. One squad of D-scythes last night insta killed a Daemon Prince that was unfortunate enough to get grounded in front of them.

So yes, there you have it, the direction I am going with my Dark Eldar. Time to get modelling.

Apocalypse and Codex Supplements
Apocalypse is now up for pre-orders, and it is a very nice supplement release, and with Farsight later in the month, I am really enjoying how Games Workshop is keeping up on the releases. The game is really full of excitement and fun with so much going on at any given time.

It comes down to one of those things, that because so much is going on, I am always dying to learn just a little bit more on what exactly the next release is going to be.

The book order looks like: Apocalypse, Farsight, Space Marines, White Scars, (yet unnamed Space Marine Supplement probably Ultramarines), and then next year with Tyranids. A lot of fun.

Are Waveserpents the answer to Eldar anti-air?
Just something I have thinking of. The Wave Serpent can get a ton of shots, and if they are twin-linked like they often get to be, they put out a tremendous number of twin-linkage. Even with 6's to hit, I was able to get my scatter lasers to hit (4 shots twin linked and  with laser lock, making everything else twin linked) and provide 7 hits against a Helldrake in a recent game. Lucky for me it was from the rear of the vehicle, but I was able to down it quickly. (which never happens to me facing these beasts).

So is the Waveserpent the Eldar/ Dark Eldar answer to flyers? Its looking so.
6/30/2013
Natfka
Dark Eldar, Eldar, Presence of Faeit